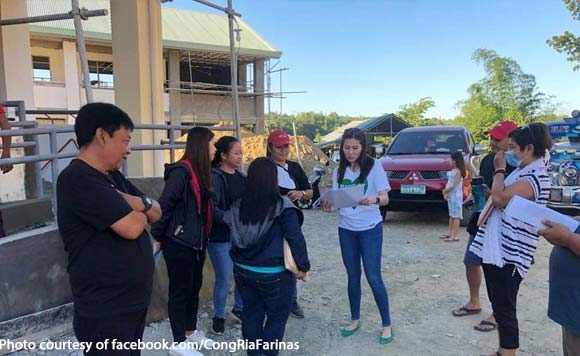 0 91
Share
Want more POLITIKO News? Get the latest newsfeed here. We publish dozens and dozens of politics-only news stories every hour. Click here to get to know more about your politiko - from trivial to crucial. it's our commitment to tell their stories. We follow your favorite POLITIKO like they are rockstars. If you are the politiko, always remember, your side is always our story. Read more. Find out more. Get the latest news here before it spreads on social media. Follow and bookmark this link. https://goo.gl/SvY8Kr

Ria Fariñas, the congresswoman of Ilocos Norte’s First District, had quite the productive weekend from Saturday, January 18, to Sunday, January 19.

The politiko was busy going around her district last weekend. She first gave the stipend of 48 students under the Commission on Higher Education’s Scholarship Program, while she also distributed the medical assistance to 334 beneficiaries in Laoag City.

Fariñas then inspected the ongoing construction sites of the Rodolfo Fariñas Jr. National Science High School. She was joined by her father, after whom the school was named, as well as Department of Education City Schools Superintendent Vilma Eda and public works officials.

Weekend well-spent! ▪Distribution of stipend to 48 students for the CHED Scholarship Program▪Medical assistance…

Sana all! Mark Go and wife buy truck of produce from Atok…