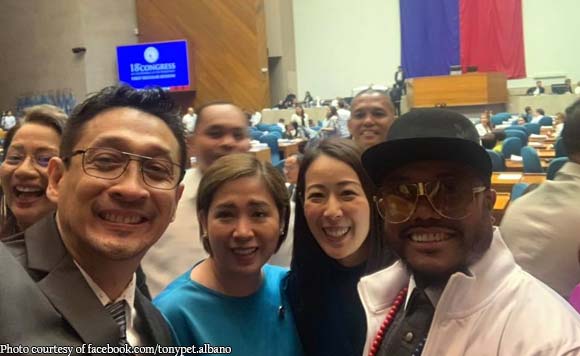 First was Apl.de.ap of the Grammy award-winning Black Eyed Peas, announced in a press conference held at the Batasang Pambansa that the group would be performing at this year’s SEA Games. Then Albano also met Vilma Santos-Recto, “The Stars for All Seasons” turned Batangas congresswoman. Former actor and ex-Quezon City Mayor Herbert “Bistek” Bautista also visited the plenary hall.

“A ‘celebrity-filled day’ at the House of Representatives… A fun-filled day, but work is paramount for us. We can be seen having pictures, but you can see that we are also busy doing our duties,” said Albano.

“As always, there are work that needs to be done. And more work still as now that the budget deliberations has started. More posts coming soon on the work of being a legislator in my perspective,” he added.

BBM on how to help frontliners: ‘Pairalin ang…