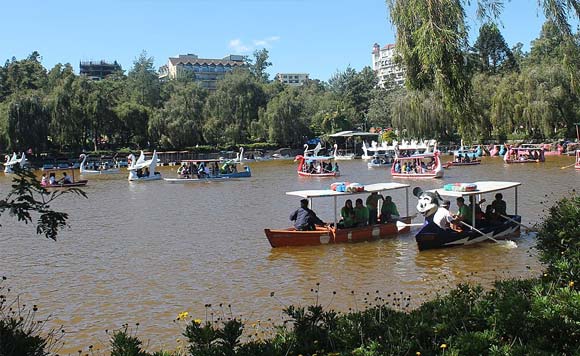 0 665
Share
Want more POLITIKO News? Get the latest newsfeed here. We publish dozens and dozens of politics-only news stories every hour. Click here to get to know more about your politiko - from trivial to crucial. it's our commitment to tell their stories. We follow your favorite POLITIKO like they are rockstars. If you are the politiko, always remember, your side is always our story. Read more. Find out more. Get the latest news here before it spreads on social media. Follow and bookmark this link. https://goo.gl/SvY8Kr

The House of Representatives has approved on third reading a measure seeking to declare Burnham Park as a national heritage park.

House Bill 9353 authored by Baguio City Rep. Mark Go aims to ensure the conservation and development of Burnham Park, one of the city’s oldest and most famous parks.

When declared a national heritage park, Burnham Park’s development shall be prioritized by the Department of Tourism (DOT) and Tourism Infrastructure and Enterprise Zone Authority (TIEZA) and the Baguio City government.

The local government and concerned national agencies shall prepare the development plan involving the conservation and maintenance of Burnham Park’s appropriate facilities within six months from the enactment of the law.

Go said the Burnham Park has become a part in the progress and prosperity of Baguio City, serving many generations of families, both residents and tourists.

Named after city-planner and American architect Daniel Burnham who designed it in 1904, Burnham Park is distinct for its geometrically and symmetrically designed stretch of leveled ground amid the city’s rolling hills.

After several design improvements over the years, the park is now composed of the following cluster areas: the Ibaloi Heritage Garden, a man-made lake, the children’s playground, the Rose Garden, the Igorot Garden, the Orchidarium, Sunshine Park, the Pine Trees of the World Park, and various picnic spots such as Picnic Grove, the Melvin Jones Grandstand where various events are held, the Athletic Bowl where many athletes train and compete, and historical symbols such as the Japanese Peace Tower.

Go said recognizing Burnham Park as a national heritage park will help strengthen the city’s cultural and historical foundation, and preserve Baguio City’s rich cultural heritage for the next generations.