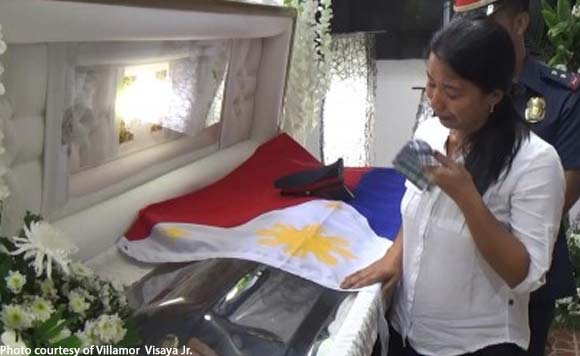 0 304
Share
Want more POLITIKO News? Get the latest newsfeed here. We publish dozens and dozens of politics-only news stories every hour. Click here to get to know more about your politiko - from trivial to crucial. it's our commitment to tell their stories. We follow your favorite POLITIKO like they are rockstars. If you are the politiko, always remember, your side is always our story. Read more. Find out more. Get the latest news here before it spreads on social media. Follow and bookmark this link. https://goo.gl/SvY8Kr

ILAGAN CITY, Isabela — As the Philippine flag drapes his coffin, fellow police officers in Ramon town of slain Staff Sergeant Richard Gumarang raised their hands in salute during the necrology service and sendoff of his remains to his hometown in Rizal, Kalinga on Monday (September 23).

Describing Gumarang as a revered hero for risking his life and limb in the line of duty, Colonel Mariano Rodriguez, Isabela police provincial director, said the slain police officer has been an example of a law enforcer’s display of courage in the face of a dangerous job to instill peace and order.

“We did not dream to end a life like this but this is to emphasize that Isabela police are willing to risk lives just for public service,” Rodriguez said, bucking claims from a retired police colonel (whom he did not name) that the police here are lazy and almost always late or absent in operations.

“When police was in action, there was an operation. It goes to show that we are working. We are not absent, we are not lazy and we are not late in doing our jobs,” he said.

“May our relentless anti-crime operations send a message to all outlaws that Isabela is not a refuge for criminals as we will continue to hunt them down and eventually put them in prison,” he added.

Rodriguez and other police officers saluted Gumarang’s remains before the hearse was escorted from the Isabela provincial police office to his Kalinga hometown.

Gumarang was killed in action in a shootout with suspected robbers in Turod Bugallon Norte village in Ramon, Isabela last September 20.

Two of the robbers were also killed and later identified as Cristobal Cristobal of Manggahan, Pasig City and Alden Francis Requndique (who identified himself as Edmar de Castro before he died) of San Juan, Ilocos Sur.

Arrested was Alfred Solis (who identified himself when arrested as Jayson Saringan) of Bayambang, Pangasinan.

The robbers earlier held up Leonora Carag, a contractor’s secretary, and took away her bag with P10,000 cash and other items. (PNA)