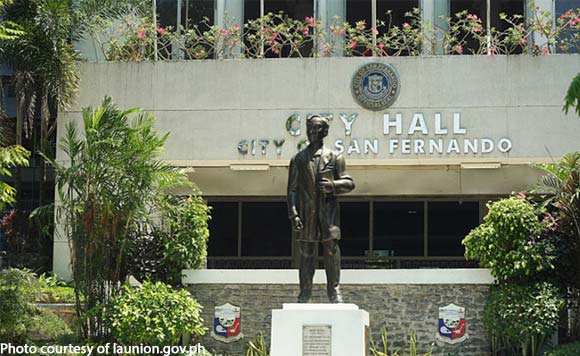 According to state auditors, scrutiny of the employees’ daily time records revealed work patterns which are “unusual”, with the potential to cause health problems.

In the 2018 annual audit report, the state auditing agency reminded the City Health Officer (CHO) of 13 vacant positions with an average total monthly salary of P334,695:

In the same report, state auditors remarked on the total overtime rendered last July which is “practically the same with the average total monthly salary of these vacancies.” 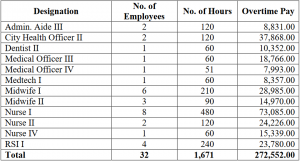 Source: 2018 Annual Audit Report on the City of San Fernando

“Given that the Office of the CHO is the primary office who provides social services to the constituents and the City government aims to be the Northern Luzon’s Center for Health and Wellness by 2020, hiring new employees for the vacancies will enable (the prompt delivery of) the services due to the constituents without sacrificing the health of its employees,” COA said.

According to San Fernando officials, as stated in the report, requests for the vacant positions have been processed, with reviews of existing internal structures currently undertaken with the aim of reducing costs and creating new units responsive to clients’ needs and concerns.

COA urged the city government to prioritize the hiring of employees under the CHO in preparation of its 2020 health vision, and to properly respond to pressing needs.