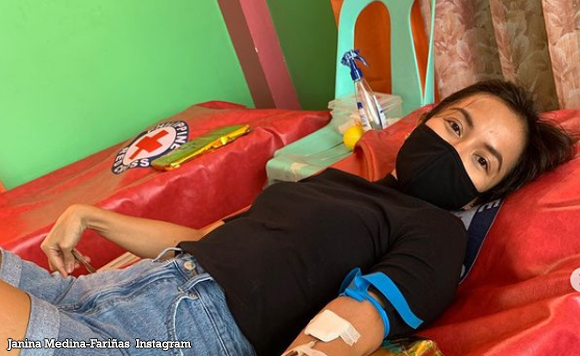 In an Instagram post on Sunday, November 15, the politiko said it was her way of giving back after her husband, businessman Rey Carlos Fariñas, was saved by donated blood when he had a motorcycle accident in 2005 and when he contracted dengue in 2012.

Fariñas said PRC needs more blood donations now, as there was a decrease in the supply of blood banks when the COVID-19 pandemic hit the country.

“That is why today, on the first ever National Day of Remembrance for Road Crash Victims, Survivors and their Bereaved Families; we chose to give a chance for another family and another person to live out their life stories the same way Carlos @cush101 did by donating blood,” Fariñas said.

Donating was also a way for the councilor to remember her late brother in law Rodolfo “JR” Fariñas Jr, who died in a motorcycle accident in 2015 when he was just 20 years old.

Fariñas’ sister-in-law, Ilocos Norte 1st District Representative Ria Fariñas, also donated blood to the PRC. The congresswoman was among the primary authors of the National Day of Remembrance for Road Crash Victims law.

“It’s been a year of ups and downs for a lot of people, more so for those who will need the PRC’s help despite the low supply. If you’re interested in donating blood, making a difference in the lives of our fellow Filipinos and help continue another family’s life story, contact your nearest Red Cross today and find out how you can safely donate during this pandemic,” said Fariñas.