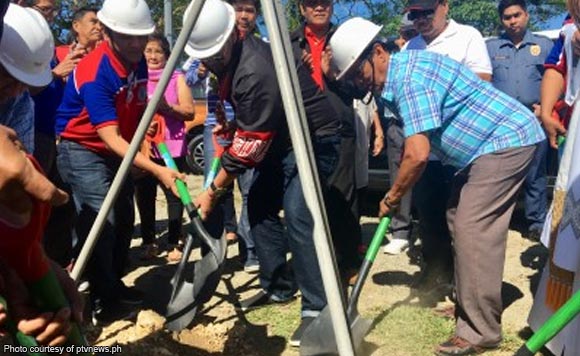 0 373
Share
Want more POLITIKO News? Get the latest newsfeed here. We publish dozens and dozens of politics-only news stories every hour. Click here to get to know more about your politiko - from trivial to crucial. it's our commitment to tell their stories. We follow your favorite POLITIKO like they are rockstars. If you are the politiko, always remember, your side is always our story. Read more. Find out more. Get the latest news here before it spreads on social media. Follow and bookmark this link. https://goo.gl/SvY8Kr

LAOAG CITY—It was a big dream that turned into a reality for village officials and residents of Poblacion in Burgos, Ilocos Norte.

Poblacion village chief Joegie Jimenez could hardly contain his emotion, as guests and visitors witnessed the release of a time capsule containing the site development plan for a 5,430-square meter Barangay government lot that will house the Amianan Tourism Village, a Tourism Infrastructure and Enterprise Zone Authority (TIEZA)-funded project.

Jimenez’s dream of having a bigger and functional Barangay Hall with educational and recreational center two years ago is not only what he got. He also got Poblacion’s modern and agro-tourism facility, which shall be known as the Amianan tourism village and community center.

If plans do not miscarry, the PHP27-million Amianan tourism village and community center will have its own two-storey commercial building, a floating stage or man-made lagoon, a gazebo, an Al Fresco restaurant, fish pond, organic farm, a public toilet and landscape amenities to attract more tourists to Burgos, which ranks second in the entire province as a top tourist destination.

“It’s a big dream for a barangay but I did not surrender to push for it,” said Jimenez, as he thanked all the public and private stakeholders, including the Department of Tourism and TIEZA, which supported the project.

In his speech, Undersecretary Martin Diño of the Department of the Interior and Local Government (DILG) lauded Jimenez and the Poblacion council for initiating the project.

“This is what we call village empowerment. It can move mountains and you are the role model in the entire Philippines for making it happen,” Diño said during the groundbreaking ceremony on Saturday.

Diño hopes the 42,000 barangays in the country would be inspired to come up with a unique and enterprising project such as the Amianan tourism village and community center.

He said the DILG has committed to finance community centers equipped with a health center, a senior citizens lounge and a Day Care center.

Citing his connection with investors here and abroad, Diño assured local officials and residents that he will bring investors to Burgos to maximize its great tourism and investment potential.

For his part, Burgos town mayor Rodolfo Garcia urged his constituents to unite and make Burgos town the best place to live and do business.

At present, Burgos town is host to the largest wind farm in Southeast Asia, home to majestic waterfalls, a historic Cape Boejedor lighthouse, and the Kapurpurawan Rocks Formation among others. (PNA)