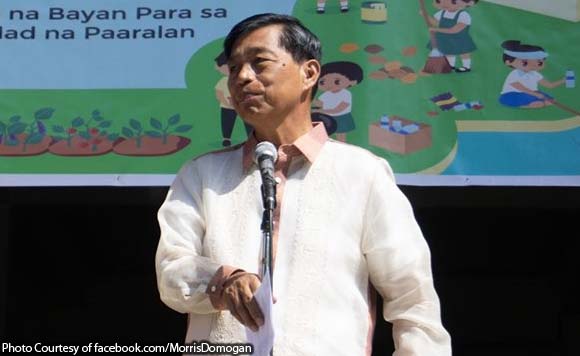 0 283
Share
Want more POLITIKO News? Get the latest newsfeed here. We publish dozens and dozens of politics-only news stories every hour. Click here to get to know more about your politiko - from trivial to crucial. it's our commitment to tell their stories. We follow your favorite POLITIKO like they are rockstars. If you are the politiko, always remember, your side is always our story. Read more. Find out more. Get the latest news here before it spreads on social media. Follow and bookmark this link. https://goo.gl/SvY8Kr

BAGUIO CITY — With less than 18 days before taking a seemingly long break from politics, outgoing Mayor Mauricio Domogan expressed regret for not building the P300-million multi-purpose sports facility within the Baguio athletic bowl.

“The money is there, but our hands are tied,” Domogan said in the vernacular during Wednesday’s Independence Day celebration.

He said the P60 million city funding earmarked originally for the rehabilitation of the Baguio athletic bowl and later funneled supposedly for the building is still available while the rest of the funds will come from the Department of Public Works and Highways.

Domogan, who lost his second bid for Congress, said they were not able to proceed with the construction since the Department of Tourism (DOT) wants to get the Burnham Park complex, of which the athletic bowl is a part, back from the city.

While DOT owns the park, the city serves as its administrator.

One of the last acts of former president Fidel Ramos before leaving Malacañang in 1998 was to have the management and maintenance of Baguio’s crown jewel turned over to the city.

“We wanted to manage it so we can beautify it,” Domogan, who was then on his last term in his first three terms as Baguio chief executive, told the Philippine News Agency (PNA).

Domogan had a grand plan to include hosting the Palarong Pambansa to spur development at the athletic bowl and eventually within the more than seven-hectare park complex.

In 20 years, the city went on to dredge the lake twice; got help from DOT to beautify the Rose Garden, including the introduction of the dancing fountain that now needs to be repaired; improve the children’s playground; segregate a portion of the park for the Ibaloys, the city’s original inhabitants; and upgrade the athletic bowl that now has an Olympic-sized pool and a tartan track.

“Now we cannot introduce costly improvements yet because we do not know DOT’s plans when they get it back, although we have sent our plea not to,” said Domogan, who would opt for a win-win situation or a solution beneficial to both DOT and the city.

The PNA cannot reach for comment DOT-Cordillera officer-in-charge director Jovi Ganongan, who is currently on an official trip. She is expected to be back before the end of June, when the city welcomes the new set of elected officials.

“It is now up to the incoming leaders to follow this up,” Domogan said.

Meanwhile, city sports coordinator Gaudencio Gonzales said, “No big budget project for the meantime. It might go in conflict with what the DOT wants for Burnham.”

Instead, the city, on Gonzales’ request, opted to pave the lot eyed for the building and use it as an open court for basketball and other sports events.

“So we can use it, for the meantime, for basketball, or volleyball or any other related sport,” said Gonzales, who holds office inside the athletic bowl.

Gonzales earlier said PHP13 million is being used and works will be completed by September when the district meets begin for the city schools and before the Palarong Panglungsod in December.

The city meet is for the selection of athletes for the Cordillera Administrative Region Athletic Association meet in February next year.

Future works for the athletic bowl includes the demolition of the small grandstand and the upgrade of the tennis court.

“You cannot even walk or sit at the small grandstand anymore, the flooring is too weak. That has to go. And it is an ugly sight,” Gonzales said.

“The plans are there, with ready funding, but we just have to wait,” Gonzales, who studied at the nearby Baguio City High School, said, adding that he used to call the athletic bowl a classroom and a playground. (PNA)