No mining to be blamed in Baguio landslide: It was nature’s fury 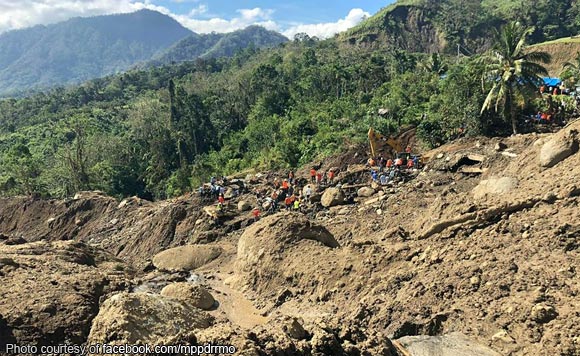 BAGUIO CITY — The more than 100 landslides of different magnitudes that occurred along the two national highways leading to Natonin town in Mountain Province are nature’s act and not in any way related to mining, a former mayor said on Monday.

“In the history of Natonin, we never had this kind of devastation and deaths but there is nobody to blame because it was nature’s act,” said Rafael, who did not seek re-election after serving Natonin from 2007 to 2010.

The over supply of rain caused more than 60 landslides – almost every 50 meters away from each other, along the 22-kilometer stretch of the Natonin-Paracelis road leading to Ifugao and several other big landslides and a road cut along the Natonin-Bontoc road, that links them to Bontoc, the capital town of Mountain Province.

Rafael said Natonin has been experiencing landslides in the past after a typhoon, which sometimes makes the town isolated for days or weeks.

“It’s not as damaging as this one, not as painful as this one,” she said, as she talked about the casualties of the landslide that washed-away the Department of Public Works and Highways (DPWH) building in barangay Banawel.

Rafael added that Natonin has no industries- no mining, no factories, no malls or even commercial establishments and definitely not engaged in mining activities that may damage nature.

The lack of industries prompts the natives to leave the place.

“The population of Natonin does not increase because people leave the town to study and work elsewhere,” Rafael said.

Ssince the 1960’s, she said Natonin never grew more than 10,000 because people leave the place to get a college degree and eventually work elsewhere.

She said their elders have never allowed mining or any activities that may destroy nature either by outsiders or local residents, which the town maintain up to the present. The lack of income generating activitites leads to outbound migration.

“Our forests are virgin,” she said.

Industries that damage the environment were never allowed in the town.

She also shared how simple life is in Natonin with residents contended with the little money they have from their salaries, using the same money to send their children to school to finish a degree and make a name outside the town, Rafael said.

Natonin produces a lawyer every year, who practices outside the town but continue to go home to their birthplace.

Most of those who stay in the town are the teachers in both the public and at the catholic school, children from elementary and high school and residents who are employed by the local government unit (LGU) and national line agencies, Rafael said.

These residents are the same people who manage the rice farms, enabling them to produce the indigenous rice variety “korel”.

While there are no mining activities in the town, the Mines and Geosciences Bureau (MGB) in the Cordillera, in its October 25, 2018 report, showed that Barangay Banawel, where the landslide occurred and killed scores of people, is declared as highly susceptible t landslide and flooding.