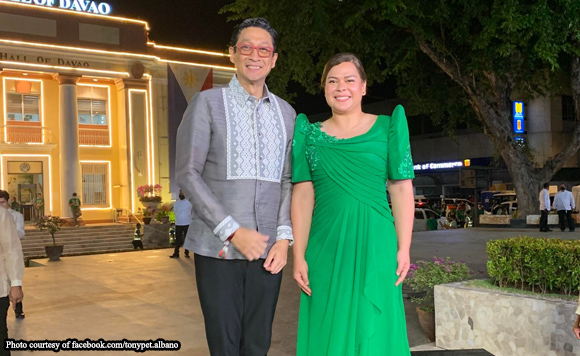 0 759
Share
Want more POLITIKO News? Get the latest newsfeed here. We publish dozens and dozens of politics-only news stories every hour. Click here to get to know more about your politiko - from trivial to crucial. it's our commitment to tell their stories. We follow your favorite POLITIKO like they are rockstars. If you are the politiko, always remember, your side is always our story. Read more. Find out more. Get the latest news here before it spreads on social media. Follow and bookmark this link. https://goo.gl/SvY8Kr

In a Facebook post on Monday, June 20, the North Luzon politiko noted how Duterte’s inauguration was attended by the who’s who in Philippine politics and society. Duterte’s father, outgoing president Rodrigo Duterte, and President-elect Ferdinand Marcos Jr. were also present.

“It gives me so much hope and happiness to have witnessed personally, the Oath Taking Ceremony of the 15th Vice President of the Republic of the Philippines, Mayora Inday Sara Duterte,” said Albano in a Facebook post.

“We ask that we all pray for our elected Vice President Inday Sara, so that she will be guided by the Holy Spirit, protected by our mighty angels, and given wisdom to lead the VPres’ office and the Department of Education & Culture as its Cabinet Secretary,” he added.