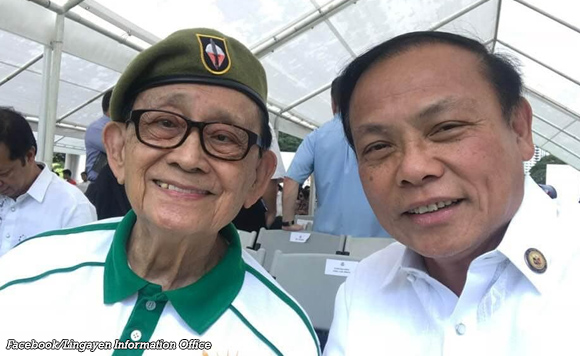 0 757
Share
Want more POLITIKO News? Get the latest newsfeed here. We publish dozens and dozens of politics-only news stories every hour. Click here to get to know more about your politiko - from trivial to crucial. it's our commitment to tell their stories. We follow your favorite POLITIKO like they are rockstars. If you are the politiko, always remember, your side is always our story. Read more. Find out more. Get the latest news here before it spreads on social media. Follow and bookmark this link. https://goo.gl/SvY8Kr

Lingayen Mayor Leopoldo Bataoil mourned the passing of former president Fidel V. Ramos, a native of the municipality just like him.

In a statement released via the Lingayen Information Office on Sunday, July 31, the North Luzon politiko noted his similarities with Ramos: They are both Lingayen natives who were part of the uniformed service – Bataoil with the Philippine National Police and Ramos with the Philippine Army. Both then joined politics.

Ramos would later become the godfather of Bataoil and his wife Gina Liza when they got mardied.

“In fact, Pres. FVR is one of the people I look up to. He served as our second parent, our godfather during our wedding with my wife, Gina Liza M. Bataoil,” said Bataoil.

“His meaningful and countless contributions in the selfless pursuit of public service cannot be denied. His untimely demise is a grief to many, such as in the Capital Town of Pangasinan where he was born,” he added.