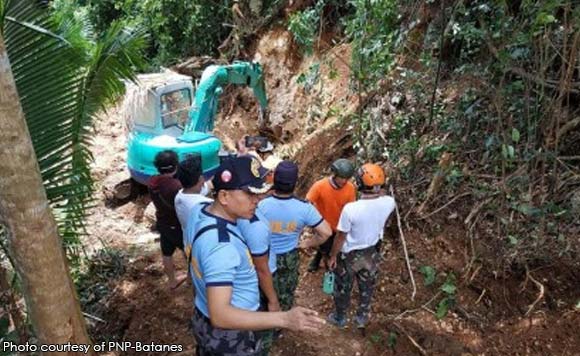 TUGUEGARAO CITY — The death toll in the Batanes earthquakes officially climbed to nine after the body of a missing Ivatan (inhabitant of Batanes) was unearthed on Monday inside a collapsed cave in Itbayat town.

Batanes provincial disaster risk reduction management office reports said the body of Edwin Ponce, a farmer, was buried when the cave collapsed as a result of the series of tremors on Saturday.

He told his mother that he would take a rest at the hammock in a cave in their farm, because of the cool weather there.

His mother, Margarita, was reported to be remorseful for allowing her son to stay at the cave.

The immediate family of Ponce, along with those of the eight other fatalities, will be among the recipients of financial assistance from the national and local governments, Labor Secretary Silvestre Bello III told the Philippine News Agency in a phone interview on Monday.

“All the victims will be given livelihood and other assistance,” he added.

Four strong earthquakes and over a hundred minor tremors struck Batanes on Saturday, killing nine people and wounding some 100 others.
(PNA)