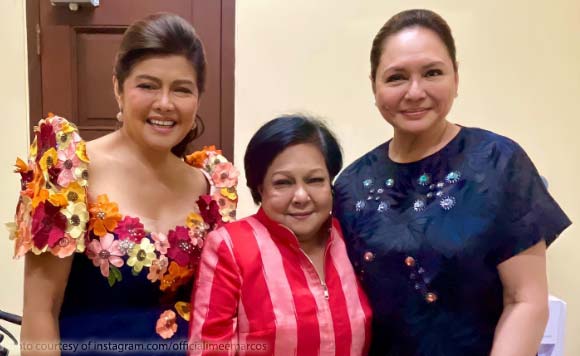 0 266
Share
Want more POLITIKO News? Get the latest newsfeed here. We publish dozens and dozens of politics-only news stories every hour. Click here to get to know more about your politiko - from trivial to crucial. it's our commitment to tell their stories. We follow your favorite POLITIKO like they are rockstars. If you are the politiko, always remember, your side is always our story. Read more. Find out more. Get the latest news here before it spreads on social media. Follow and bookmark this link. https://goo.gl/SvY8Kr

The awarding ceremony for the 2022 Filipino Academy of Movie Arts and Sciences Awards (FAMAS) was even more memorable for Senator Imee Marcos for she was able to reunite with her fellow “Dekada ’70 FAMAS Babies.”

On Sunday, July 31, the North Luzon politko posted a picture of her together with National Artist Nora Aunor and ABS-CBN President Charo Santos-Concio on the sidelines of FAMAS 2022.

The three previously worked together in the iconic1982 movie “Himala,” which was starred by Aunor and where Santos-Concio was executive producer. At the time, Marcos was head of the Experimental Cinema of the Philippines. “Himala” was written by National Artist Ricky Lee and was directed by Ishmael Bernal.

Marcos was so happy to see them together, she even joked that a movie is in the works among the three of them.

In the 2022 FAMAS, Marcos received the Exemplary Award for Public Service, while Aunor was given the Susan Roces Celebrity Award. Santos-Concio was hailed Best Actress for her performance in the movie “Kun Maupay Man It Panahon.”