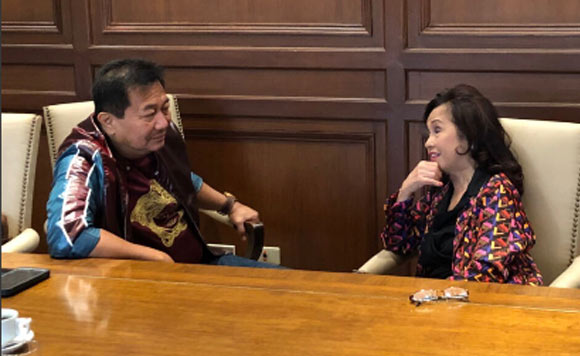 0 297
Share
Want more POLITIKO News? Get the latest newsfeed here. We publish dozens and dozens of politics-only news stories every hour. Click here to get to know more about your politiko - from trivial to crucial. it's our commitment to tell their stories. We follow your favorite POLITIKO like they are rockstars. If you are the politiko, always remember, your side is always our story. Read more. Find out more. Get the latest news here before it spreads on social media. Follow and bookmark this link. https://goo.gl/SvY8Kr

The Cordillera region’s leaders are confident that the autonomy bill pending before Congress will be passed with the election of former President Gloria Macapagal-Arroyo as new Speaker of the House of Representatives.

“We are hoping that Speaker Arroyo can help us,” Baguio City Mayor Mauricio Domogan said in the Ilocano dialect in a late afternoon press conference here on Wednesday. “We are just waiting for the reorganization in the Lower House if there is something like that would happen. We are getting an appointment with her and whoever will be, if they will not change Congressman Rodolfo Farinas as majority floor leader and Congressman Pedro Acharon, chairman of the committee on local governments.”

“Let us help our congressmen push for our autonomy bill to be calendared,” Domogan said, citing that the Bangsamoro Organic Law (BOL) was passed by both Houses of Congress and is now in the Office of the President for signature.

He stressed both the BOL and the Cordillera autonomy being pushed are hinged on Section 15 of Article 10 of the 1987 Constitution.

“We are hopeful that Speaker GMA and other officials of the House will help our congressmen because all of them unanimously authored the House Bill on Cordillera autonomy.”

He also cited in the press briefing the latest information from RDC co-chairman and National Economic Development Authority Regional Director Milagros Rimando that Senator Joseph Victor Ejercito is going to co-author the Senate Bill 1678, together with Senator Juan Miguel Zubiri, who expressed support and filed the bill at the Upper Chamber of Congress.

Recalling President Rodrigo Duterte’s State of the Nation Address, he said he and other leaders of the upland region were all hoping that the Cordillera autonomy would be mentioned. But it was not.

“I was hoping that it would be mentioned because the information that reached me before the SONA was that the Cordillera autonomy would be one of the priorities,” he said, but urged Cordillerans who hope for self-determination not to be discouraged and continue pushing for it. (PNA)