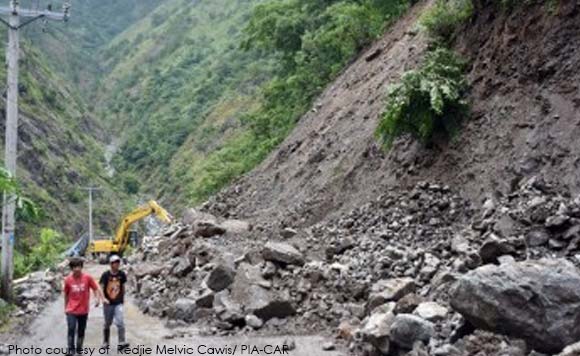 BAGUIO CITY– The whole stretch of Kennon Road is indefinitely closed to motorists and pedestrians after the authorities have yet to put measures to stabilize the soil in the area, an official said on Thursday.

He said Department of Public Works and Highways (DPWH) personnel are still clearing the thoroughfare of debris and boulders.

“There is yet no definite date until when would the road be closed because it is still very dangerous. The soil keeps on falling and the priority is the safety of the people,” Mogol said on the sidelines of the 3rd quarter joint Regional Development Council-Peace and Order Council (RDC-RPOC) meeting at The Mansion House here.

However, Mogol said the CDRRMC has given “window hours” for residents’ vehicles and public utility vehicles in the area to be allowed to pass– from 6 a.m. to 9 a.m. and again from 5 p.m. to 7:30 p.m.

“We allotted a window for the residents to pass from 6 a.m. to 9 a.m. because the students there study in Baguio aside from the traders who bring their produce to Baguio,” Mogol said.

Outside the window hours, no vehicle or person is allowed to pass, due to the high risk of falling debris and landslide.

“We are discouraging people to pass even while walking because the area is really unstable and after the window time, the heavy equipment will already start working, bringing down rocks and soil,” Mogol said.

He said the village officials, along with DPWH personnel and policemen, play an important role in assuring the safety of the residents along Kennon Road.

“The barangay officials are there, assisting the residents during the window hours, guarding and assuring that everyone is safe,” he said.

He added that aside from the landslide at Camp 5, there will still be a third blasting operation to break the boulders blocking the flow of water on the river along Camp 6 near Lion’s head.

“It is now rainy season and we know that we are in a landslide-prone area due to our topography. We encourage everyone to be prepared and ready- not only our homes, our families but in our barangays, let us cooperate and help each other,” Mogol said. (PNA)