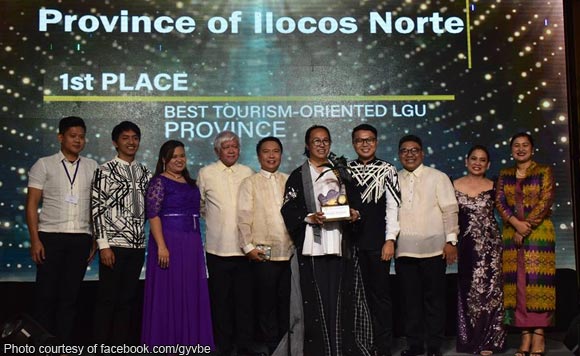 0 297
Share
Want more POLITIKO News? Get the latest newsfeed here. We publish dozens and dozens of politics-only news stories every hour. Click here to get to know more about your politiko - from trivial to crucial. it's our commitment to tell their stories. We follow your favorite POLITIKO like they are rockstars. If you are the politiko, always remember, your side is always our story. Read more. Find out more. Get the latest news here before it spreads on social media. Follow and bookmark this link. https://goo.gl/SvY8Kr

After bridesmaid finishes in 2016 and 2017, Ilocos Norte bagged the Pearl Award for for Best Tourism-Oriented Province in the Philippines from the Association of Tourism Officers of the Philippines and the Department of Tourism.

Provincial Tourism Officer Ianree Raquel said they “almost quit” sending an application for the award after ending up second in two consecutive years.

He said the provincial government has initiatives to sustain the influx of tourists through events and intensified promotion of natural and man-made attractions.

Such initiatives include the Media Incentives Desk, which lures movie producers to shoot films in the province; the Provincial Tourism Code; and a clear cultural policy on sustainable tourism development.

ATOP recognizes the best practices of local government units in implementing policy reforms for tourism development.