Ilocos board member is mad at seeing ‘epal’ politiko faces in projects, vehicles 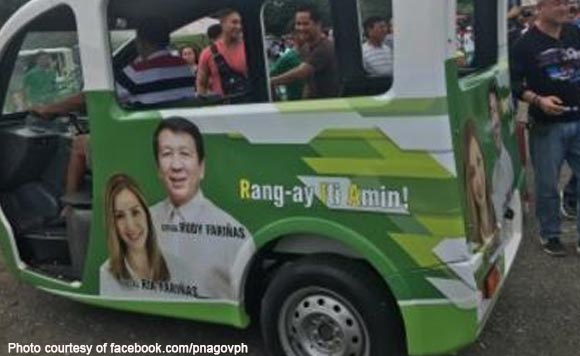 A lawmaker in this city is bent on pursuing the passage of an ordinance to strengthen an anti-epal bill, prohibiting the display or posting of government official’s names and photos in all government projects, services and vehicles.

In a joint committee hearing attended by mayors, councilors, village chairpersons and representatives from the Department of Public Works and Highways and other local government units held at the SP session hall on Thursday afternoon, Lazo reiterated, “we are all guilty of epal but we should not tolerate such small things — for small things can become big.”

Citing several measures such as the Commission on Audit Circular 2013-004 dated January 2013 and a DPWH Department Order No. 21 series of 2017 that prohibits the posting of names and photos of government officials using taxpayers’ money, Lazo encouraged all concerned officials to give meaning and honor existing guidelines from COA, DPWH and even the Department of Interior and Local Government, which earlier issued the same order in 2010.

“The problem with the existing (law) is that we don’t know where to pinpoint liability. So, we have to input provision to give more teeth to the law,” Lazo explained during the joint committee hearing conducted by the SP’s committees on laws and public works.

Once approved, Lazo’s proposed anti-epal ordinance seeks to penalize the setting up of epal signages in the province. Violators shall be slapped with six months to one year imprisonment and a fine of PHP5,000.

Like in various parts of the country, there are existing epal posters in the entire province of Ilocos Norte. These are mostly found in government-funded roads, bridges, schools and welcome arcs including government-owned vehicles.