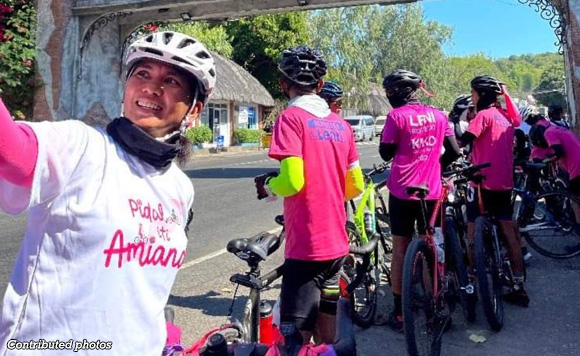 0 133
Share
Want more POLITIKO News? Get the latest newsfeed here. We publish dozens and dozens of politics-only news stories every hour. Click here to get to know more about your politiko - from trivial to crucial. it's our commitment to tell their stories. We follow your favorite POLITIKO like they are rockstars. If you are the politiko, always remember, your side is always our story. Read more. Find out more. Get the latest news here before it spreads on social media. Follow and bookmark this link. https://goo.gl/SvY8Kr

Around 50 bikers have joined a bike caravan to support the presidency of Vice President Leni Robredo in Ilocos.

Donned in pink shirts, the participants biked at least 82 kilometers from Ilocos Sur to Ilocos Norte. Many supporters also attended the event, cheering and encouraging the participants.

Photos and videos of the event became viral on Twitter, with netizens using the hashtag #WalangSolidNorth.

Around 50 bikers joined the more or less 82km bike caravan from Ilocos Sur to Ilocos Norte, while more than 500 attended the parade and culminating program. | via @aprilrafales pic.twitter.com/hP2EF8QjAR

LOOK: Bikers in Ilocos Norte and Ilocos Sur participate in Pidal iti Amianan on Sunday to boost support for the candidacies of Leni-Kiko tandem in the provinces. @inquirerdotnet 📷 Contributed photos/Makabayan Ilocos pic.twitter.com/Zikf5Nc0XW