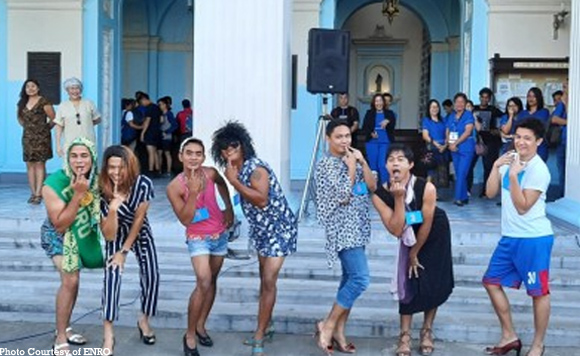 Some 20 male workers at the Capitol wore dresses and ran wearing the high heels in front of PureGold along Rizal Rizal street all the way to the Provincial Capitol building.

“It is symbolic as we usher the Women’s Month celebration,” said Janet London, focal person of the Gender and Development Office (http://northboundasia.com/ilocano-men-wear-heels-to-usher-womens-month/).

People, who witnessed the event were delighted to see the male participants, who gamely showed their support for women activities in the province.

In Ilocos Norte, various women’s groups in collaboration with the Ilocos Norte government have prepared month-long activities geared towards women empowerment and the promotion of gender equality.

Meanwhile, Capitol workers also distributed “kikay” kits as well as hygiene kits to all pediatric and gynecology patients at the Governor Roque B. Ablan Sr. Memorial Hospital in this city.

With a “mardi gras” theme, more male participants are observed participating in the women-led activities of the province.

Other events include the “Kinni-kinni” (swaying hips) parade on March 18, and a gender and development summit on March 25.