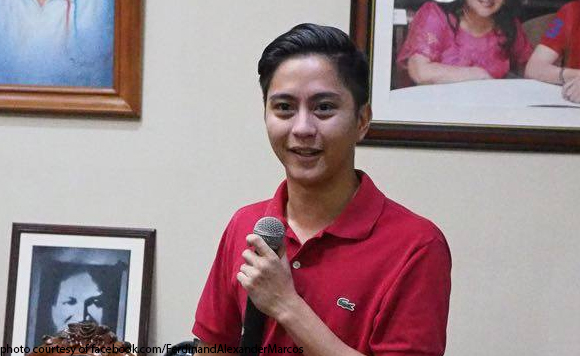 0 933
Share
Want more POLITIKO News? Get the latest newsfeed here. We publish dozens and dozens of politics-only news stories every hour. Click here to get to know more about your politiko - from trivial to crucial. it's our commitment to tell their stories. We follow your favorite POLITIKO like they are rockstars. If you are the politiko, always remember, your side is always our story. Read more. Find out more. Get the latest news here before it spreads on social media. Follow and bookmark this link. https://goo.gl/SvY8Kr

Tiktok user @JanjansVlogs posted an excerpt of Marcos’ interview in the documentary “The Kingmaker,” where he apparently learned from his grandfather, the late dictator Ferdinand Marcos Sr., that there’s money to earn from politics.

“Cause you know, he wanted to do physics, math, biology. But my grandfather is like, ‘There is no money in that,’ so switch to politics,” Sandro said in the docu.

Ferdinand Marcos’ 21-year rule was marred by widespread corruption, killings, torture, and media oppression. He was ousted during the 1986 EDSA People Power Revolution, but his family has since made their political comebacks.

Sandro Marcos is running for Ilocos Norte 1st District congressman in the 2022 elections.

so i was watching The KingMaker documentary. i came in to watch as i was going to vote for bongbong this coming election.. not anymore #fyp #tagalog

Have you met Ria Fariñas’ 4 AM Club?