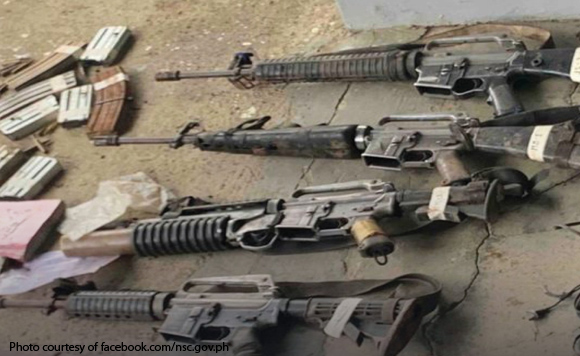 0 2,739
Share
Want more POLITIKO News? Get the latest newsfeed here. We publish dozens and dozens of politics-only news stories every hour. Click here to get to know more about your politiko - from trivial to crucial. it's our commitment to tell their stories. We follow your favorite POLITIKO like they are rockstars. If you are the politiko, always remember, your side is always our story. Read more. Find out more. Get the latest news here before it spreads on social media. Follow and bookmark this link. https://goo.gl/SvY8Kr

High powered guns and other war materiel were recovered by the Philippine Army after an encounter with suspected members of the New People’s Army (NPA) in Asipulo, Ifugao.

He added that the alleged communist rebels belong to the Guerrilla Front-Abra-Mt. Province- Ilocos Sur. Retrieved from the site of the firefight were two M-16 Armalite rifles, an M-653 baby Armalite rifle, a rifle grenade, two hand grenades, six anti-personnel landmines, and other war materials.

“The use of anti-personnel landmines by the rebels is a clear violation of the Comprehensive Agreement on Human Rights and International Humanitarian Law (CAHR-IHL), which prohibits any land mines in warfare,” Lt. Col. Franz Josef Diamante, 54th IB commander, said