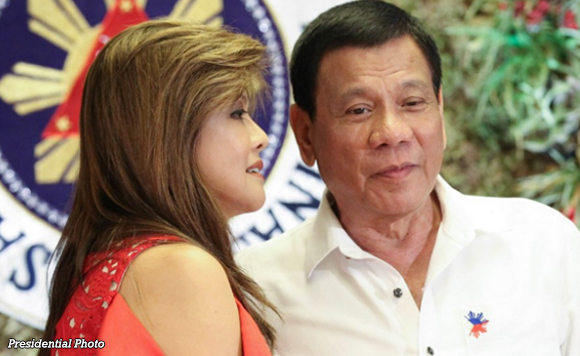 0 1,095
Share
Want more POLITIKO News? Get the latest newsfeed here. We publish dozens and dozens of politics-only news stories every hour. Click here to get to know more about your politiko - from trivial to crucial. it's our commitment to tell their stories. We follow your favorite POLITIKO like they are rockstars. If you are the politiko, always remember, your side is always our story. Read more. Find out more. Get the latest news here before it spreads on social media. Follow and bookmark this link. https://goo.gl/SvY8Kr

Senator Imee Marcos was the first to break the deafening silence by the Marcos camp and family after President Rodrigo Duterte alluded that her brother, former senator and presidential candidate Ferdinand “Bongbong” Marcos Jr. is a cocaine addict.

In a press briefing, the Politiko shared that they were “absolutely heartbroken” by the president’s verbal attacks against her younger brother.

“The reality is, we are absolutely heartbroken by the almost violent reaction of the President,” Sen. Marcos said during a press briefing on Tuesday, November 30, in her home province of Ilocos Norte. “But we are not the enemy, that is very clear. We’ve been allies, we’ve been supporters, and it goes way back,” she added.

Senator Imee also reminded everyone that both families have deep roots even from way back. “President [Duterte’s] father was a distinguished member of my father’s cabinet. Really, we have been very grateful to the President for the many blessings that he has brought upon us, not only in Ilocos Norte but the entire country,” she said.