Group calls for ban on release of balloons, sky lanterns 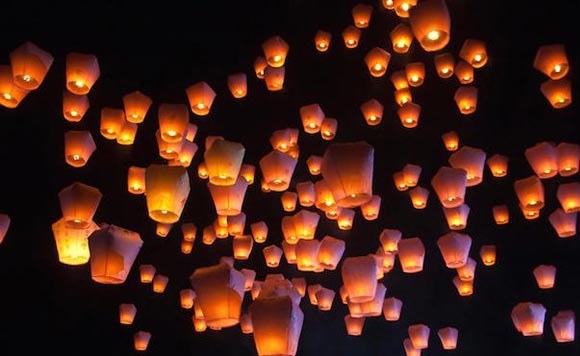 The release of balloons and sky lanterns to the sky is a sight to behold among organizers but down there, sea creatures under the deep blue sea are at risk and it could even mean their lives.

In Ilocos Norte, a young group of environmentalists is urging lawmakers from the 21 towns and two cities to stop this activity.

“We are calling the attention of the local government units and other concerned authorities. Just like what we’ve been posting, releasing of balloons is much more of littering. Kindly choose the welfare of our environment over an candy-eye activity. Kindly choose an activity that will benefit the community and will not harm the environment,” said in Thursday’s Facebook post of the Movement Against Plastic Pollution, a non-profit youth volunteer organization which is trying to advocate zero-waste lifestyle, particularly in engaging Ilocanos to refuse single-use plastic.

Through Facebook and other social networking sites, the MAPP, led by Patricia Dacanay, has appealed to all concerned authorities and individuals to do away with this practice and choose a more sustainable and eco-friendly activity.

For the past few days, several photos of balloon released by employees of various local government units and academe were posted online, to which MAPP called their attention saying, “Balloons don’t go to heaven. They don’t make your wishes come true or such. Balloons pop, drop and harm our environment.”

In an open statement released Thursday, organizers from the MMSU College of Nursing has apologized for using helium balloons.

“It was not our intention to harm anyone or the environment itself. Also, we admit that it did not cross our minds that the balloons could harm our beautiful nature. And with that, we really want to express our sincerest apologies,” said in the public statement.

Together with other youth volunteers, the MAPP is active in social networking sites to promote its advocacy. The growing number of environment activists in the province is making use of the online technology to promote their advocacy, which primarily aims to love, protect and educate people about their role as stewards of nature.

“Plastic pollution is everyday’s problem. Plastics are everywhere, including in your own dinner table, in your own food. So be part of the solution,” said Dacanay, a young environmentalist from Currimao town and founder of MAPP. (PNA)