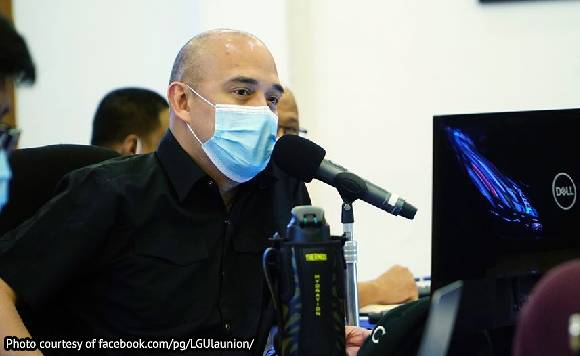 “To arrest the further spread of coronavirus disease 2019 (Covid-19) in the municipality and to benefit its surrounding municipalities as well as the province in general, there is a need to declare a heightened classification for the said municipality,” Ortega said in Executive Order No. 23 issued on Monday.

He said on July 16, the province of La Union was declared by the Inter-Agency Task Force for Emerging Infectious Diseases under extended modified general community quarantine.

Caba town, however, has recorded seven new confirmed cases on that day, he added.

Ortega has ordered the local chief executive and the local police to ensure compliance such as the establishment of checkpoints, observance of the minimum health protocols, the closing of non-essential establishments, and curfews within their jurisdiction.

As of July 20, Caba has a total of 12 confirmed cases, nine of them are admitted to hospitals while three have recovered.

Meanwhile, Ortega and San Fernando City Mayor Alfredo Ortega have requested the Regional Inter-Agency Task Force for Covid-19 to place the city of San Fernando under ECQ due to the increasing confirmed cases.

On Monday, La Union recorded seven new confirmed cases, six of them were from San Fernando City while one was from Caba.

In a statement, Ortega said one of the six new cases in the city died on July 19 and was buried on July 20.

The patient was a 67-year-old male from Barangay San Agustin who showed symptoms but refused admission to a hospital. He was swabbed on July 18.

Barangays San Agustin and Tanqui were placed under heightened community quarantine (HCQ) on Monday indefinitely while the identified critical zone in barangays Canaoay and Lingsat were also placed under HCQ for 72 hours.

“All households in these areas will be placed under strict monitoring and shall stay inside their homes to ensure containment of the virus,” Ortega said.

As of noon on July 20, San Fernando City has a total of 20 confirmed cases, five of them are admitted to the hospitals, eight are in an isolation facility, one is in strict home quarantine, four have recovered, and two have died.

La Union has a total of 57 confirmed cases, 26 are admitted to the hospitals, 19 have recovered, five are on strict home quarantine, and seven have died as of 5 p.m. of July 20. (PNA)