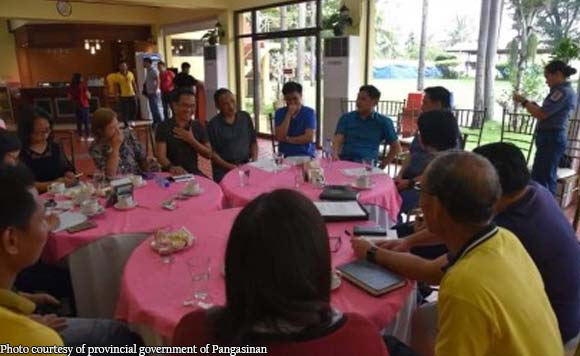 0 233
Share
Want more POLITIKO News? Get the latest newsfeed here. We publish dozens and dozens of politics-only news stories every hour. Click here to get to know more about your politiko - from trivial to crucial. it's our commitment to tell their stories. We follow your favorite POLITIKO like they are rockstars. If you are the politiko, always remember, your side is always our story. Read more. Find out more. Get the latest news here before it spreads on social media. Follow and bookmark this link. https://goo.gl/SvY8Kr

LINGAYEN, Pangasinan — Governor Amado Espino III on Tuesday ordered a temporary ban on the entry of pigs in Pangasinan to ensure that the province would not be affected by African swine fever (ASF).

“I was informed that other provinces in the region are implementing similar precautionary measure (temporary ban) so we deem this is needed,” he said during an emergency meeting Wednesday on pre-emptive action against ASF.

Present in the meeting called by the governor were provincial government offices and national agencies amid the reported presence of the disease in Bulacan and Rizal provinces.

Assistant provincial veterinarian Jovito Taravejos said the supply of hog in the province is sufficient despite the temporary ban.

“We have more than enough supply of pigs in the province and there are no cases of suspected ASF yet, so the temporary ban is needed to ensure that no ASF will enter our province,” he said in an interview.

Taravejos also assured that pork from the backyard hog raisers in the province are safe to consume.

The next meeting will be on Friday to include local government units and other stakeholders. (PNA)