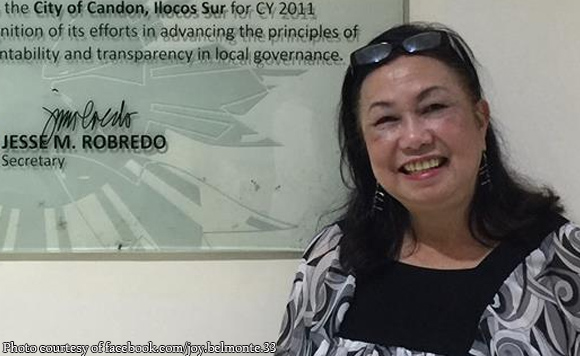 0 450
Share
Want more POLITIKO News? Get the latest newsfeed here. We publish dozens and dozens of politics-only news stories every hour. Click here to get to know more about your politiko - from trivial to crucial. it's our commitment to tell their stories. We follow your favorite POLITIKO like they are rockstars. If you are the politiko, always remember, your side is always our story. Read more. Find out more. Get the latest news here before it spreads on social media. Follow and bookmark this link. https://goo.gl/SvY8Kr

The Fourth Division of the Sandiganbayan ruled that the motion filed by former mayor Grace Singson to dismiss her graft charge for the alleged irregular purchase of P1.82 million pumps lacked merit.

In a 10-page resolution, Associate Justice Reynaldo Cruz ruled on two of the issues presented in the dismissal motion filed by the ex-mayor – the alleged violation of her right to a speedy trial, and the lack of a criminal offense from the case filed by the prosecution.

“The statement of the accused is not accurate. Jurisprudence states that a distinction must be made between fact-finding investigations conducted before and after the filing of a formal complaint,” Justice Cruz writes, slamming down the ex-mayor’s claim that the prosecution’s delay in filing the case constituted a violation of her right to a speedy trial.

The ex-mayor’s counsel also tried to convince the court that the prosecution’s case did not actually impute a crime, allegedly having failed to give details of her individual participation in the conspiracy. In the motion they argued that participation in the P1.82 million transaction isn’t a crime in itself.

To which the anti-graft court responded that simply alleging conspiracy as a means to commit the offense is sufficient.

“From the foregoing, the Court finds that the Information has accurately alleged the elements of the crime charged, describing the same with such particularity so as to serve its purpose of ensuring that the accused are formally informed of the facts and the acts constituting the offense, enabling them to suitably prepare their defenses,” the resolution reads.

Nine other individuals were also charged for violating the Anti-Graft and Corrupt Practices Act alongside the former mayor including the city treasurer, accountant, engineer, budget officer and a Sangguniang Panglungsond Secretary, among others.

In 2004, the ex-mayor and nine other officials were accused of conspiring to award a P1.82 million contract for the purchase of pumps to a private company despite not having the available budget, and the presence numerous irregularities in the liquidation and purchase documents and receipts.

Undersigned in the resolution are Chairperson Alex Quiroz and Associate Justice Bayani Jacinto who expressed their concurrence. #