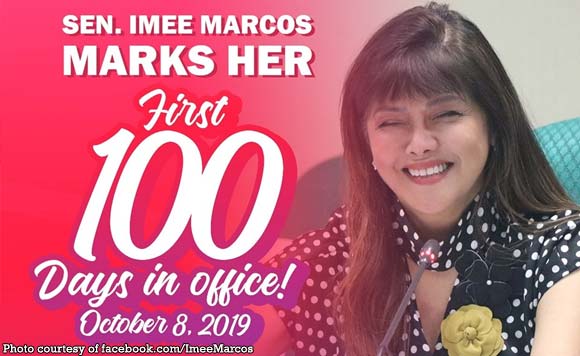 0 270
Share
Want more POLITIKO News? Get the latest newsfeed here. We publish dozens and dozens of politics-only news stories every hour. Click here to get to know more about your politiko - from trivial to crucial. it's our commitment to tell their stories. We follow your favorite POLITIKO like they are rockstars. If you are the politiko, always remember, your side is always our story. Read more. Find out more. Get the latest news here before it spreads on social media. Follow and bookmark this link. https://goo.gl/SvY8Kr

Imee Marcos is definitely loving the life of a senator!

The politiko marked her first 100 days in office in a Facebook post on Wednesday, October 9. She said she has filed 72 bills and resolutions so far.

“Some of her priority bills are the Land Reform Act, Anti-Terrorism Act, and amendments to the Internal Revenue Code, particularly the Value Added Tax, to address inter-generational poverty in the country,” read Marcos’ post.

“As chairperson of the Committee on Electoral Reforms and People’s Participation, she led the passage of her bill on the postponement of the Barangay and Sangguniang Kabataan elections to December 2022.

She has also conducted hearings of the Committees on Economic Affairs and Cultural Communities which she also chairs,” the post added.

From congressman to driver: Tonypet Albano willing to drive…