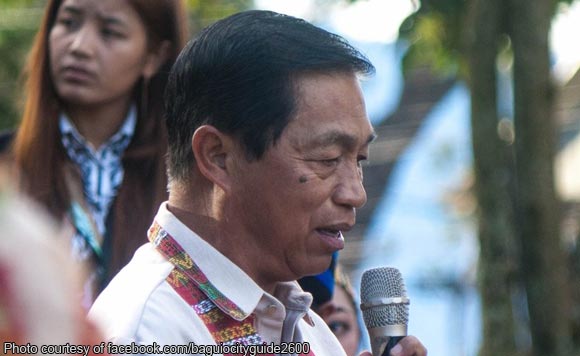 0 241
Share
Want more POLITIKO News? Get the latest newsfeed here. We publish dozens and dozens of politics-only news stories every hour. Click here to get to know more about your politiko - from trivial to crucial. it's our commitment to tell their stories. We follow your favorite POLITIKO like they are rockstars. If you are the politiko, always remember, your side is always our story. Read more. Find out more. Get the latest news here before it spreads on social media. Follow and bookmark this link. https://goo.gl/SvY8Kr

Baguio City Mayor Mauricio G. Domogan said a 50-hectare portion of the 139-hectare city-owned property in the Sto. Tomas school area iwas one of its options for the location of its engineered sanitary landfill.

“The city will have to appropriate the required funds to build the road network within the property to help facilitate the construction of the sanitary landfill. In the meantime, we have to wait for the realization of the same project within the Benguet Corp. property in Itogon to guide us in our future decisions on how to effectively and efficiently address our garbage disposal woes,” Domogan said in an interview Monday.

He mentioned that the city government has entered into an agreement with Benguet Corp. for the use of its titled property that used to be the company’s closed Antamok open pit site.

Based on initial estimates from the City Engineering Office, the local government needs at least P300 million to build the road network within the city-owned property before the construction of the sanitary landfill facility can be implemented considering the area’s terrain.

The local government also allocated P5 million for the fencing of the perimeter of a portion of the property for this proposed purpose.

Residents in the area, however, removed the monuments placed by the surveyors, identifying the metes and bounds of the proposed landfill site.

Under the city’s 10-year solid waste management plan, which was approved by the National Solid Waste Management Commission (NSWMC), the city-owned property was identified as the proposed site for the sanitary landfill and WTE facility that will include a small engineered sanitary landfill, a centralized materials recovery facility, an anaerobic digester, a WTE plant, two Environmental Recycling System (ERS) machines, hazardous waste treatment plant and special waste treatment plant.

For the past nine years, the local government has spent more than P1 billion for the hauling and tipping fees of the city’s residual waste to the sanitary landfill in Capas, Tarlac.

Environment Management Bureau (EMB) Cordillera Regional Director Reynaldo Digamo, in a recent press conference, said that the proposed sites of the engineered sanitary landfill (ESL) and the WTE facility within portions of the Antamok open pit are feasible pursuant to the standards prescribed by existing laws, rules and regulations.

He also said that they have included the city as among the LGU beneficiaries of equipment that include a shredder and a molder to process plastic waste, as the agency’s assistance to address the persistent garbage problem hounding the city and its residents. (PNA)