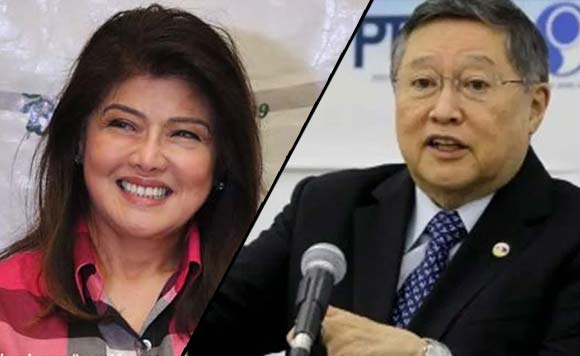 0 20
Share
Want more POLITIKO News? Get the latest newsfeed here. We publish dozens and dozens of politics-only news stories every hour. Click here to get to know more about your politiko - from trivial to crucial. it's our commitment to tell their stories. We follow your favorite POLITIKO like they are rockstars. If you are the politiko, always remember, your side is always our story. Read more. Find out more. Get the latest news here before it spreads on social media. Follow and bookmark this link. https://goo.gl/SvY8Kr

Dominguez’s offer came after the two traded barbs over the Ilocos Norte’s claim that her father’s flagship rice program, Masagana 99, was successful.

Marcos claimed that Masagana 99 “was a very effective use of commercial banks, rural banks, and even cooperative banks.”

Dominguez, who was former president Corazon Aquino’s Agriculture secretary, said he cleaned up “the mess that was left by Masagana 99.”

“There were about 800 rural banks that were bankrupted by that program and we had to rescue them,” he said.

The Finance Secretary said Marcos can be briefed by a senior official of the Cabinet’s Economic Development Cluster (EDC).

“As chair of the Economic Development Clusterof the Duterte administration, I acknowledge the questions and concerns you raised regarding the Philippine economy during the Senate committee of the whole hearing on the government’s response to the COVID-19 pandemic last May 20, 2020,” Dominguez said.

“Rest assured that the EDC is studying the points you raised during the committee hearing,” he added.

Likas muna! Families evacuate due to flooding in Pangasinan