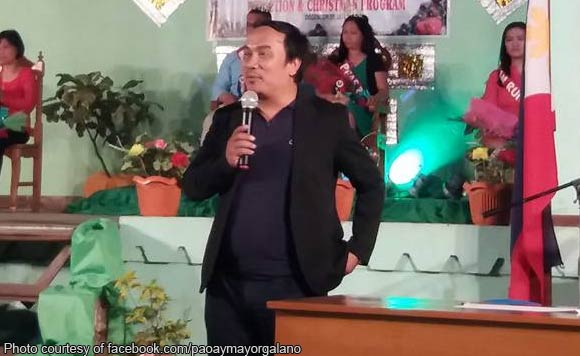 0 485
Share
Want more POLITIKO News? Get the latest newsfeed here. We publish dozens and dozens of politics-only news stories every hour. Click here to get to know more about your politiko - from trivial to crucial. it's our commitment to tell their stories. We follow your favorite POLITIKO like they are rockstars. If you are the politiko, always remember, your side is always our story. Read more. Find out more. Get the latest news here before it spreads on social media. Follow and bookmark this link. https://goo.gl/SvY8Kr

Dismissed Paoay town mayor Jessie Galano is expected to soon return to his post after the Court of Appeals (CA) issued a 60-day temporary restraining order (TRO) on his dismissal.

Armed with a seven-page copy of the TRO dated June 21, 2018, Galano faced the media on Tuesday, saying he is just waiting for the Department of the Interior and Local Government (DILG) to serve the TRO to all concerned parties.

On June 14, the DILG served the dismissal order from the Office of the Ombudsman against the Paoay mayor and his Municipal Administrator Bruno Dumlao for grave abuse of authority, gross neglect of duty, grave misconduct and serious dishonesty.

“This is just a trial on the part of the Paoayeños. What happened was just a simple neglect of duty and not corruption. It was procedural in nature and I thank God for helping me extend my public service,” said Galano.

The case stemmed from the filing in 2015 of administrative charges by then Paoay town mayor Dolores Clemente against then Vice Mayor Galano and Sangguniang Bayan member Bruno Dumlao for violation of Republic Act 6713 and Republic Act 7160 specifically on the falsification of travel documents, expenses for which were reimbursed from the municipal treasurer’s office.

“We still have so many plans for Paoay and we are grateful to serve. How I wish the DILG will implement the order real soon,” Galano said. (PNA)