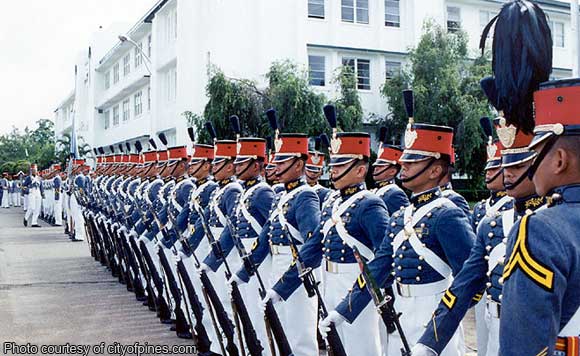 0 367
Share
Want more POLITIKO News? Get the latest newsfeed here. We publish dozens and dozens of politics-only news stories every hour. Click here to get to know more about your politiko - from trivial to crucial. it's our commitment to tell their stories. We follow your favorite POLITIKO like they are rockstars. If you are the politiko, always remember, your side is always our story. Read more. Find out more. Get the latest news here before it spreads on social media. Follow and bookmark this link. https://goo.gl/SvY8Kr

The local government of Tuba town in Benguet is not keen on the Philippine Military Academy expanding its training grounds there.

In a resolution, the Tuba town council asked President Rodrigo Duterte to reject a recommendation to the effect from Environment Secretary Roy Cimatu.

According to the local government, it was not informed or consulted about “the proposed issuance of the presidential proclamation reserving an area of 105.9018 hectares for the multipurpose training ground and other military facilities of PMA in Tuba.” (http://northboundasia.com/2018/05/09/benguet-town-nixes-pma-expansion/)

Cimatu’s recommendation was for Duterte to issue a presidential proclamation reserving an additional 106 hectares for the training ground of the PMA in Barangay Camp 6.

Last February, Cimatu said the PMA wanted to expand the present 374,000 hectare area proclaimed as military reservation by another 105 hectares.

He said the PMA has asked President Duterte to issue a proclamation regarding the matter.

Also, the Tuba local government said the delineation and recognition process for Tuba Ancestral Domain is pending before the National Commission on Indigenous Peoples.

The local council also cited Section 2 of the Local Government Code, which provides that “it is likewise the policy of the State to require all national agencies and offices to conduct periodic consultations with appropriate local government units, non-governmental and peoples organizations and other concerned sectors of the community before any project or program is implemented in their respective jurisdictions.”

It added no project shall be implemented by the government unless consultations are conducted and prior approval of the concerned councils is obtained.

On the other hand, the council resolution said there are also ancestral land claimants over the lot cited by the proposed presidential proclamation.