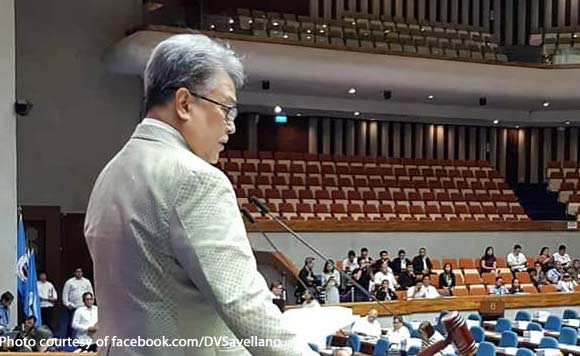 0 318
Share
Want more POLITIKO News? Get the latest newsfeed here. We publish dozens and dozens of politics-only news stories every hour. Click here to get to know more about your politiko - from trivial to crucial. it's our commitment to tell their stories. We follow your favorite POLITIKO like they are rockstars. If you are the politiko, always remember, your side is always our story. Read more. Find out more. Get the latest news here before it spreads on social media. Follow and bookmark this link. https://goo.gl/SvY8Kr

House Deputy Speaker Deogracias Victor Savellano said the long-term development of the Salomague Port will further boost tourism not only in Ilocos Sur but in the entire Northern Luzon.

Savellano made the remarks as the Salomague Port recently took on its first visit from a cruise ship late last year with over 4,000 passengers.

Savellano said the development of the Salomague Port is part of a long-term development plan that would boost tourism and the economy not only of the province, but the entire northern part of the country.

“That is part of a development plan that we made in the First District – to develop the port for cruise ships rather than a container port which could have some adverse effect on the environment,” said Savellano.

Last December 26, MV Spectrum, a Caribbean cruise ship carrying 4,000 passeners docked at the Salomague Port. Another cruise ship is expected on January 26 according to the lawmakers

“It brightened prospects in the tourism industry for Salomague and Ilocos Sur,” said Savellano.

Savellano earlier asked the Department of Tourism and Tourism Infrastructure And Enterprise Zone Authority (TIEZA) to build world-class restrooms in the 11 municipalities of the province to serve local and foreign tourists.

Savellano says there is so much to do and so many things to see in Ilocos Sur.

He added that he construction a coastal road was also part of this plan – to make the airport more accessible to tourists from the Salomague Port.