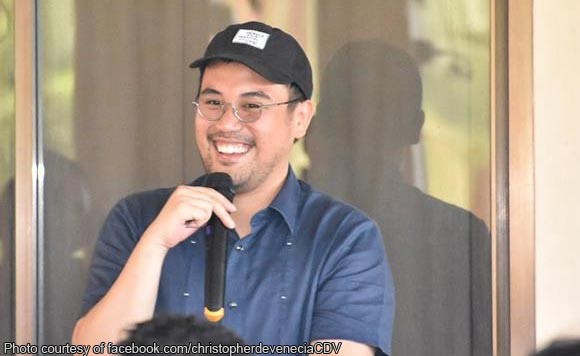 0 460
Share
Want more POLITIKO News? Get the latest newsfeed here. We publish dozens and dozens of politics-only news stories every hour. Click here to get to know more about your politiko - from trivial to crucial. it's our commitment to tell their stories. We follow your favorite POLITIKO like they are rockstars. If you are the politiko, always remember, your side is always our story. Read more. Find out more. Get the latest news here before it spreads on social media. Follow and bookmark this link. https://goo.gl/SvY8Kr

“I rise on a point of personal and collective privilege to honor Mayor Alipio Fernandez Jr., a fellow statesman and an esteemed kabaleyan (provincemate),” de Venecia told his colleagues in a privilege speech at the House of Representatives on Tuesday.

Fernandez, who became vice mayor and mayor of this city, died of cancer on August 9. He was 75 years old. He is lying in state at the family’s Old House at Ciudad Elmina here.

De Venecia said the passing of Mayor Al has caused a deep dent in the hearts of the Dagupeños because he was so much loved and admired.

He said the mayor built the first City Museum of Dagupan that now houses the piano owned by Leonor Rivera when she lived in Dagupan in 1890 and 1891. Rivera was the lady love of Philippine national hero Dr. Jose P. Rizal.

There was also a sizable collection of paintings by full-blooded Dagupeño and national artist Victorio Edades, among others, he added.

He was the first mayor who adopted Dagupan Hymn as the singular music that extolled all the aspirations of the Dagupeños.

“It was Mayor Al, whose reign in the city gave more positive impact than anyone else,” de Venecia said.

“His most glaring accomplishment, however, was the stewardship of Dagupan City’s reconstruction after it was decimated by the July 16, 1990 earthquake. My father, Jose de Venecia, is acknowledged as the Architect of Modern Dagupan. But Mayor Al was credited as its Builder, who managed, coordinated and supervised the reconstruction of the city.”

“More importantly, as then City Mayor, he showed them (Dagupeños) how good governance can move Dagupan forward till it rose from the rubble of the 1990 earthquake, like a phoenix rising from the ashes,” de Venecia added.

His last affiliation in the government was as member of the Board of Directors of the Clark International Airport Corporation.

Mayor Al will be buried on Saturday at the Eternal Gardens here.

Lawyer Alipio Vittorio Ramon “Alvin” Fernandez, son of Mayor Al, said there would be a funeral mass at 8 a.m. at the Metropolitan Cathedral of St. John.

“After the mass, the remains will be brought to the nearby city plaza for public viewing,” he added. (PNA)