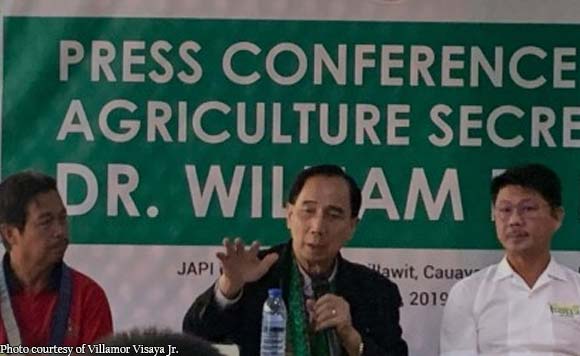 CAUAYAN CITY, Isabela — Agriculture Secretary William Dar has vowed to compensate for culled hogs amid the rise in pig mortality in some parts of the country but “it would be not equivalent to the market value but at least 50-percent.”

Dar, who spoke in a press conference after his speech at the 4th National Organic Agriculture Scientific Conference at the Japi Hotel on Tuesday here, said he also ordered the strict monitoring of the entry and exit of agricultural commodities in Rizal.

Debunking reports that African swine fever (ASF) had hit the country, Dar said the increased cases of pig deaths in San Isidro, Rizal had yet to be confirmed that it was due to the disease.

He directed the Bureau of Animal Industry to expedite confirmatory laboratory tests, including sending blood samples to foreign laboratories to ascertain the cause of deaths of the animals.

The village was already quarantined and all the hogs were automatically collected and to be burned within “one kilometer from the virus’ ground zero and the further surveillance of areas within 10 kilometers.”

After the disinfection of the area, the backyard pig raisers will not be allowed to raise pigs unless a clearance will be issued later.

He said that the 20-percent mortality was too high as the usual mortality rate is only three-to-five-percent. (PNA)