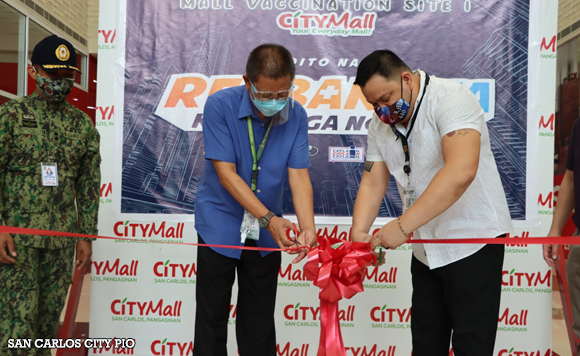 0 1,152
Share
Want more POLITIKO News? Get the latest newsfeed here. We publish dozens and dozens of politics-only news stories every hour. Click here to get to know more about your politiko - from trivial to crucial. it's our commitment to tell their stories. We follow your favorite POLITIKO like they are rockstars. If you are the politiko, always remember, your side is always our story. Read more. Find out more. Get the latest news here before it spreads on social media. Follow and bookmark this link. https://goo.gl/SvY8Kr

In an interview, Mayor Julier Resuello said the mall is the 11th vaccination site in the city.

“We have started coordinating with other malls in the city so that when more vaccines become available, we are more than ready,” he said.

Residents of San Carlos City may now register for the vaccination program at the mall and they will be contacted when their immunization schedule is set, he said.

“We appeal to the national government for more doses of vaccine as we are one of the cities in Pangasinan that has a big population. Since April, we have only been able to vaccinate almost 6,000 residents or just five percent of our population,” he added.

Resuello said the city is willing to spend for the purchase of vaccines as it has allotted an initial PHP50 million for the procurement.

“If they will only allow us to purchase, then we are willing. We wanted to be of help to the national government and to our constituents,” he said.

Meanwhile, City Mall supervisor Lucy Ferrer said they have partnered with the local government unit as part of their corporate social responsibility.

“We are glad to serve the residents through this partnership. The use of the mall’s facility for the vaccination program is for free until the end of the program,” she said in a separate interview.

“This is very convenient even during the rainy season. Residents could just go to the mall to register or later on be inoculated,” he said. (PNA)

Ilocos Norte, Sur under GCQ with heightened restrictions to…