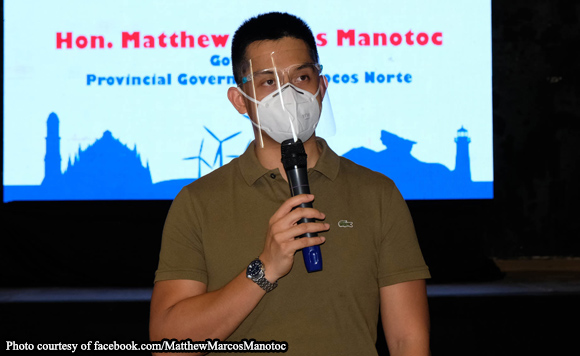 0 1,025
Share
Want more POLITIKO News? Get the latest newsfeed here. We publish dozens and dozens of politics-only news stories every hour. Click here to get to know more about your politiko - from trivial to crucial. it's our commitment to tell their stories. We follow your favorite POLITIKO like they are rockstars. If you are the politiko, always remember, your side is always our story. Read more. Find out more. Get the latest news here before it spreads on social media. Follow and bookmark this link. https://goo.gl/SvY8Kr

LAOAG CITY – The Ilocos Norte government is looking for more skilled workers to speed up the ongoing construction of its three major projects which are expected to be completed during the term of Governor Matthew Joseph Manotoc.

“They do not need to submit anything in the job portal. All they need to do is to register and fill out the information sheet and wait for their call to be interviewed,” she said.

All three projects are at the peak of the construction phase.

Funded through a PHP2 billion soft loan from the Development Bank of the Philippines during the last term of former governor and now senator Ma. Imelda Josefa “Imee” Marcos, the Ilocos Norte government has allocated the amount for the rehabilitation of the Marcos Sports Stadium, construction of the provincial capitol expansion building, and the reconstruction of the Dap-ayan Food Park which are all located in the city proper here.

These multi-billion infrastructure projects are part of the Metro Ilocos Norte master plan initiated by the senator, which is being carried out under the administration of Governor Matthew Joseph Manotoc.

The year-long pandemic, however, is taking its toll on the projects but the Provincial Engineering Office assured that the contractors are doing their best to meet the time frame of the projects which are expected to be completed before the final term of Manotoc.

With this, more skilled workers are needed for the construction works of the provincial capitol expansion building and rehabilitation of the Marcos Stadium.

To give way for the expansion of the provincial capitol building which will be built with the same height and design of the existing edifice, several offices at the Capitol were temporarily relocated at the Laoag Centennial Arena and the La Tabacalera Center. The Marcos Stadium, on the other hand, will also be elevated one meter above the present road level.

The Dap-ayan Center is expected to rise as the tallest government building in the province — eight-story high — with basements for parking and major rooms for offices, among others. (PNA)