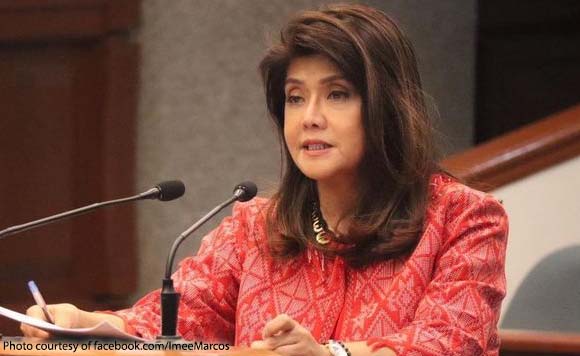 0 3,218
Share
Want more POLITIKO News? Get the latest newsfeed here. We publish dozens and dozens of politics-only news stories every hour. Click here to get to know more about your politiko - from trivial to crucial. it's our commitment to tell their stories. We follow your favorite POLITIKO like they are rockstars. If you are the politiko, always remember, your side is always our story. Read more. Find out more. Get the latest news here before it spreads on social media. Follow and bookmark this link. https://goo.gl/SvY8Kr

Senator Imee Marcos renewed her call for the passage of the bill allowing a higher limit on campaign expenses following the Commission on Elections (COMELEC) banning physical contact during the campaign season.

The Ilocano politiko made the statement in a Facebook post on Thursday, July 15. She said with physical contact being prohibited to help protect Filipinos against the coronavirus, there would surely be a need for candidates to resort to broadcast, outdoor, and other forms of media to campaign. These would entail more expenses on the part of the candidates.

“All that media will inevitably raise costs for the candidates, which is why I sponsored a bill on higher campaign expense limits before the end of the last session. If three pesos per voter was a ludicrous basis for calculating the maximum spend of a candidate before, it will be outright lying in 2022 with all the online and broadcast media required during the pandemic!” said Marcos.

Marcos has already sponsored the bill in the Senate plenary months ago. Senate debates are on hold and would likely continue once the session reopens in July.