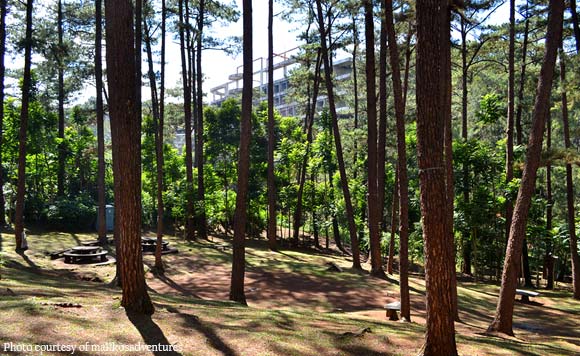 BAGUIO CITY — Elementary pupils from a private school asked President Rodrigo Duterte to help keep and maintain the pine tree park beside the Baguio Convention Center and prevent it from being sold.

Accompanied by their teachers and school head, the children turned over 67 letters from students of Baguio Pines Family Learning Center (BPFLC) to Mayor Mauricio Domogan late afternoon on Monday, which they asked to be transmitted to President Duterte.

“I am very determined to help preserve and protect the pine tree forest near convention center. Every time we have our urban walk, we always pass along that area and it gives us a breathing space,” Nikki Flores, 12, a student of BPFLC told Philippine News Agency (PNA) during the turnover of the letters.

Nikki said preserving the environment, specifically saving the park, is important in providing fresh and clean air for the people of Baguio.

As one who suffers from asthma, the Grade 6 pupil said the plants in the park, which release oxygen into the air, will help people like her living in the city.

“Its getting hotter every day, and I am having difficulty in breathing. Pine trees are giving me access to fresh air,” she said.

She said that as children, they are supposed to enjoy their childhood with fresh air and a healthy environment.

“In my age, I have been exposed to over development leading to the exploitation of our natural resources, there is cutting of trees, buildings are everywhere,” she said.

Nikki said “progress does not mean pollution and over-development. If that is how we see progress, its basically a destruction.”

One of the letters read: ” Dear President, Please do not allow them to cut our trees here in Baguio. This is for our future. I love trees.”

BPFLC administrator Nelly Bayla said the students initially tried to involve themselves into the matter when they wrote to former President Gloria Macapagal Arroyo to help save pine trees at the park in 2009.

This was during the height of the discussion with the Government Service Insurance System (GSIS) regarding the sale of the tree park to a corporation that will mean the cutting of the trees.

“We bid our first campaign to save trees which made a big impact in the academe because we were able convince (former President) GMA to help protect the area by giving an order to preserve and protect our forest reserve there,” she said.

Bayla said they have 290 students who wrote the letters but decided to only get letters representing each level from Grade 1 to 6.

“We want to save the trees in our city, pine trees are integrated in our school logo. Our advocacy will continue. With the help of our students we can make a change and save the environment,” she said.

The pine tree park is a property of GSIS, which was a subject of a sale negotiation with the city government.

The city offered to purchase the property with an initial offer of P300 million. GSIS eventually responded and informed the city that the fair market value of the property was over P434 million.

When the city’s finance committee decided to take GSIS’ offer, it inexplicably raised its asking price from P434 million to P670 million.

The GSIS later said it was no longer willing to sell the property because it was looking for a partner that would develop the same to maximize its potentials in generating added resources for the government-owned and controlled corporation.

Several sectors in the city have expressed concern that the pine tree forest will soon vanish due to reports that a Manila-based company owning several malls have expressed interest in the property.

Domogan, in an earlier interview, reiterated that the city is very willing to buy the property if only to preserve the pine tree park, the only remaining forest area at the city’s central business district. (PNA)