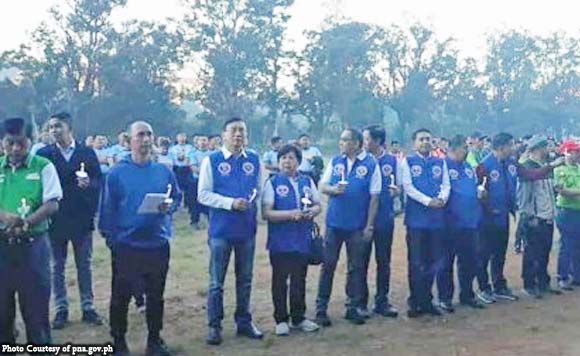 BAGUIO CITY — An official of the Commission on Elections (Comelec) on Sunday called on candidates to make good on their “solemn promise” to abide by the rules and regulations of the upcoming midterm polls.

Candidates pledged to ensure an honest and credible 2019 polls here during the simultaneous signing of peace covenant, interfaith prayer rally, and Unity Walk.

During the event, which marked the start of the election period, candidates pledged to “respect the norms of conduct expected of public servants and commit to run a clean campaign observing fairness, common decency, honesty, and good faith”.

Comelec Cordillera regional director Julius Torres said the peace covenant is a “solemn promise” that would show their maturity in abiding by the rules and regulations of the elections.

“If a candidate cannot follow the simple undertaking in a peace covenant what more if he or she gets elected,” he said, and reiterated that violence and intimidation have no room in the campaign and do not increase the chances of candidates winning the polls.

In Baguio City alone, there are five candidates for congressman, nine for mayor, six for vice mayor, and 53 for city councilor.

During the event, the candidates were joined by different stakeholders, who also committed to ensure a credible and honest election.

On the sidelines of the event, Torres said they are still waiting for the recommendation of the Philippine National Police (PNP) and the Armed Forces of the Philippines (AFP) for an assessment, which would be the basis of Comelec’s decision to declare an area under its control.

“During our inspection, we saw no violations of our rules and regulations. We just need to improve the signages,” he said.

The Comelec is also set to launch an anti-vote buying campaign on Jan. 17 to complement the peace covenant signing, which will be participated by different sectors.

“This is a good development to us considering Baguio has a peaceful and credible elections. It is a must to intensify the move for a credible and honest election. We should not let our guards down,” Martin said. (PNA)