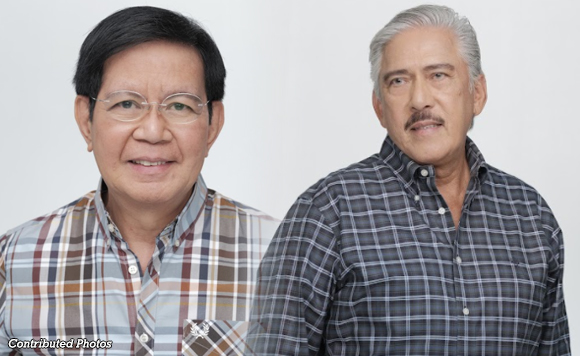 0 2,031
Share
Want more POLITIKO News? Get the latest newsfeed here. We publish dozens and dozens of politics-only news stories every hour. Click here to get to know more about your politiko - from trivial to crucial. it's our commitment to tell their stories. We follow your favorite POLITIKO like they are rockstars. If you are the politiko, always remember, your side is always our story. Read more. Find out more. Get the latest news here before it spreads on social media. Follow and bookmark this link. https://goo.gl/SvY8Kr

BAGUIO CITY, Benguet — With their shared vision of living in a country where technology is being used to create data-driven solutions that will address modern-day problems instead of tearing society apart, Partido Reporma standard-bearer Panfilo “Ping” Lacson said he is impressed where this city is going next under the leadership of his former apprentice Mayor Benjamin Magalong.

Lacson and his running mate Senate President Vicente ‘Tito’ Sotto III met with Magalong on the sidelines of their speaking engagement with the officers and members of Sangguniang Kabataan (SK) during their ‘Tumindig’ Youth Empowerment forum Friday (December 17) at the Baguio Convention Center.

In the same summit, the local government unit (LGU) made a detailed presentation about its ongoing smart city project, which hopes to transform Baguio into a world-class metropolis equipped with state-of-the-art facilities to ease public and business sector access to government services, among other plans.

Magalong’s vision is connected to the digital transformation of government and research and development agenda of Lacson, who has been very supportive of LGUs that are actively responding to the needs of their constituents through creative solutions with the aid of technology.

The Baguio Smart City Command Center is an innovative project of the LGU, which was launched only last September. Magalong said they are hoping to become a full-fledged smart city by 2025 with an even more ambitious smart mobility transportation system in the pipeline.

The retired Philippine National Police (PNP) deputy chief for operations explained that turning his hometown into a smart city makes sense to him, not only in terms of maintaining peace and order, but also to facilitate economic growth without sacrificing the environment and health of the public.

“Many people are saying that a smart city is just putting up a CCTV system for security and for public safety. That is a safe city system. But for us, sir, in the City of Baguio we leveled up several notches higher. It’s a very, very comprehensive type of system,” Magalong told Lacson during their meeting.

Next year, Baguio City has earmarked P263-million for the complete rehabilitation of its traffic control system. Magalong thanked Sotto for securing P160-million of the intended budget under the proposed 2022 General Appropriations Bill (GAB).

Lacson made a quick tour of the Baguio City Command Center during his visit and saw firsthand the benefits of having such a comprehensive digital governance system that was designed to respond and adapt to the demands and concerns of the public in real-time and/or with less human intervention.

“Very impressive, almost unbelievable. But we saw it with our own two eyes, and imagine if this can be replicated all over the country, initially, for the 146 cities? Wow! You can just imagine. It’s all digital. This is a dream come true,” Lacson told Baguio City-based reporters in a brief interview.

Magalong showed Lacson and fellow Senator Risa Hontiveros, who also spoke at the SK forum, their integrated command and communications center with a geographical information system that can monitor everything that is happening around the city in real-time.

Its network of hardware and software programs enables the local government to collect, transmit, analyze and store all the data it needs to formulate better strategic plans of action in response to both emerging and recurring community problems, especially in times of crisis, according to Magalong.

Also tied to the smart city program is the improvement of internet connectivity in Baguio City through its ‘Project Lightning’ and ‘Project AirGig’ in collaboration with several local and international power and telecommunication companies under a public-private partnership agreement.

The presidential aspirant spoke glowingly about Magalong and his vision for his city. In his speech at the SK event, Lacson said the citizens of Baguio City were fortunate and made the right decision when they elected Magalong to lead their local government.

“I would say Baguio City has never been led this way before, from good to better, and I hope this will be the best leadership that Baguio will ever have. So, congratulations. Why do I say this? Because I know him (Magalong) too well,” Lacson told the youth sector here.

“It’s a blessing that Mayor Magalong got elected as mayor of Baguio City… He is a perfect example of good governance… Good governance can only be made possible by good leadership. And I’d like to emphasize, without leadership by good example, we will go nowhere as a nation,” the Partido Reporma standard-bearer added.

Magalong is seeking re-election as mayor to continue his good programs for the city. He is running under the Nationalist People’s Coalition, which Sotto chairs, and has previously gone on record endorsing the Lacson-Sotto tandem to lead the entire country next year.