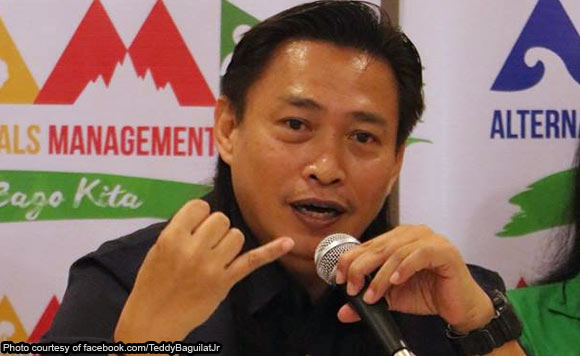 0 435
Share
Want more POLITIKO News? Get the latest newsfeed here. We publish dozens and dozens of politics-only news stories every hour. Click here to get to know more about your politiko - from trivial to crucial. it's our commitment to tell their stories. We follow your favorite POLITIKO like they are rockstars. If you are the politiko, always remember, your side is always our story. Read more. Find out more. Get the latest news here before it spreads on social media. Follow and bookmark this link. https://goo.gl/SvY8Kr

An opposition lawmaker blamed ruling party PDP-Laban’s “politicization” of barangays through its intensive campaign for federalism and charter change for the rampant vote buying incidents reported during the conduct of the village and youth council posts.

“Barangay officials have become highly politicised bec of PDP-Laban’s federalism campaign wherein the village chiefs are asked to attend federalism meetings, made to pledge support to charter Change and are asked to take their oath as party members violating the principle of non-partisanship for barangay officials,” Ifugao Rep. Teddy Baguilat told reporters in a text message.

“It’s no wonder why many of them now approach solons and LGU (local government unit) executives asking for cash support during elections because consider themselves as partymates and ward leaders of the politicians,” Baguilat continued.

This came after Department of the Interior and Local Government undersecretary Martin Diño revealed that the government agency is mulling to file cases against congressmen and LGU officials who have allegedly engaged in vote buying.

Diño said that their list of politikos supposedly involved in vote buying now contains the names of around 100 congressmen and 1,000 LGU officials.

Baguilat said he would be “fully supportive” of the DILG when it files charges against erring politikos.

“An honest to goodness drive to prosecute violators will surely help,” he said.

Under Articles 263 and 264 of the Omnibus Election Code, people found guilty of vote buying would be imprisoned between one to six years, disqualified from holding public office and stripped of the right to vote.

Foreigners guilty of vote buying would be deported after they serve the prison sentence and political parties found guilty would be sentenced to pay a fine of at least P10,000.