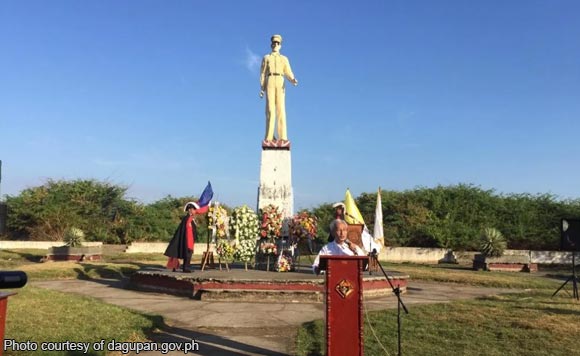 0 356
Share
Want more POLITIKO News? Get the latest newsfeed here. We publish dozens and dozens of politics-only news stories every hour. Click here to get to know more about your politiko - from trivial to crucial. it's our commitment to tell their stories. We follow your favorite POLITIKO like they are rockstars. If you are the politiko, always remember, your side is always our story. Read more. Find out more. Get the latest news here before it spreads on social media. Follow and bookmark this link. https://goo.gl/SvY8Kr

DAGUPAN CITY — The city government is set to build a brand-new park here named after the iconic General Douglas MacArthur to preserve history in the city.

Mayor Belen Fernandez, in an interview during the commemoration of the 74th Lingayen Gulf Landing on Wednesday, said the park will be a picnic ground, which could serve as ‘outing spots’ for families and friends in the city.

“We will allot around PHP15 million to PHP20 million for the construction and development of the park. We will add that in our budget for 2019,” Fernandez said.

A lot in Bonuan Tondaligan area owned by Dagupan City Water District (DCWD) was chosen to be the ideal site for the picnic park.

“They have given their permission to demolish that abandoned water tank there,” she added.

The current MacArthur monument in Bonuan Gueset, one of more than 10 heritage sites in the city, however, will be retained.

“We will continue the rehabilitation of the park for future generations,” Fernandez said.

Meanwhile, the Villaflor family donated one half of their collections of MacArthur commemorative stamps to the Dagupan city government, while the other half goes to the provincial government of Pangasinan.

During World War 2, MacArthur and his troop, along with many Filipino fighters, have been instrumental in the liberation of Luzon from Japanese forces.

Next year, the city and province will be celebrating the 75th anniversary of MacArthur’s famous landing in Lingayen Gulf on Jan. 9, 1945 that started the liberation of Luzon and the Philippines from Japanese occupation. (PNA)