‘Another hero has fallen’: Albanos give aid to kin of slain Isabeleño soldier 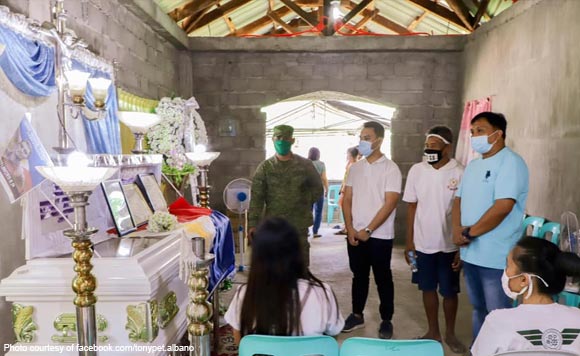 Isabela First District Representative Antonio “Tonypet” Albano is mourning the death of Isabeleño soldier Cpl. Ernesto Bautista Jr., who was among the soldiers killed in a clash with Abu Sayyaf forces in Sulu.

On Wednesday, April 22, the politiko said in a Facebook post that he and his brother Governor Rodolfo “Rodito” Albano III extended financial assistance to Bautista’s family.

“Another hero has fallen. Once more, I ask you to join me in honoring our fellow Isabeleño, Cpl. Ernesto L. Bautista Jr., from Barangay Naguilian Sur, City of Ilagan, Isabela… In behalf of our fellow Isabeleños, I offer my deepest and sincerest condolences to their families,” Albano said.

“While this may not be enough to ease their pain and sorrow, Governor Rodito Albano and I would like to extend financial assistance to the bereaved families of SSg. Jayson P. Gazzingan and Cpl. Ernesto L. Bautista Jr., through the efforts also of 1D Provincial Board Member, Delfinito Emmanuel Albano,” he added.