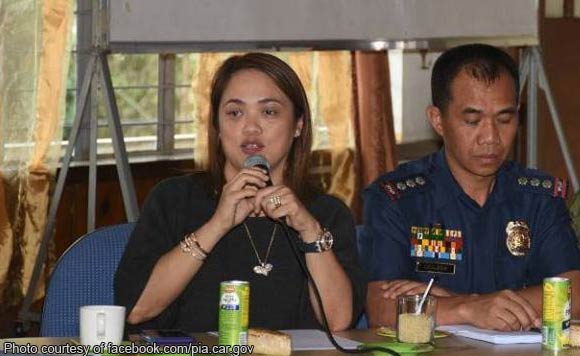 0 317
Share
Want more POLITIKO News? Get the latest newsfeed here. We publish dozens and dozens of politics-only news stories every hour. Click here to get to know more about your politiko - from trivial to crucial. it's our commitment to tell their stories. We follow your favorite POLITIKO like they are rockstars. If you are the politiko, always remember, your side is always our story. Read more. Find out more. Get the latest news here before it spreads on social media. Follow and bookmark this link. https://goo.gl/SvY8Kr

Abra Governor Jocelyn Bernos on Saturday said the imposition of the total gun ban in her province would help in the maintenance of peace and order.

She explained that the measure would also prevent other groups or individuals that may cause harm to her constituents and to the delegates of the Cordillera Administrative Region Athletic Association (CARAA) meet slated Sunday to Wednesday at the capital Bangued and the adjoining towns.

Bernos’ reaction came after Philippine National Police chief Director General Ronald Dela Rosa approved the suspension of all Permits to Carry Firearms Outside of Residence (PTCFOR) and Permits to Transport and Purchase of Explosives/ Explosive Ingredients (PTTPEEI) in Abra.

In a statement released on Saturday, the Police Regional Office Cordillera (PROCOR) stated “the memorandum from the Chief, PNP specifically provides that the suspension of the PTCFOR and PTTPEEI shall take effect on the following dates: Cordillera Administrative Region Athletic Association (CARAA) meet for a period of six days from February 4-9, 2018; Bangued Town Fiesta for a period of four days from February 23 to 26, 2018; and during the Kawayan Festival from March 1 to 9, 2018.”

​“This is in response to the request of Cordillera Administrative Region PNP Regional Director, PCSupt Edward Carranza to ban the transport of firearms and Explosive Ingredients due to the scheduled series of events in the province​,​”​ the statement read.​

The PROCOR also said that based on the PNP chief’s memorandum, “the suspension of the permits is part of security preparations that aims to enhance the safety and security of all the athletes, including local and foreign tourists who are expected to attend the activities.”

The order specifically states that “only members of the PNP, AFP and other Law Enforcement Agencies (LEAs) who are performing official duties and in agency prescribed uniforms will be allowed to carry firearms. This is to ensure that the aforementioned events/celebrations would be free from firearm-related incidents.”

In a related development, Governor Bernos expressed her gratitude to the parents of the athletes for allowing their children to participate in the annual regional sports event.

“Thank you for the trust and confidence that you have shown to the province of Abra,” said Bernos.

For those parents who had second thoughts in permitting their children to participate in the meet, Bernos said “there’s what we call, there’s always next time. You are always welcome again, when Abra will have the chance to host CARAA again.”

She also thanked the leaders in the Cordillera for supporting the games.

In relation to security measures, Police Senior Superintendent Emmanuel Peralta, PROCOR’s chief of Directorial Staff said that more than 1,000 uniformed men including members of the Armed Forces would be stationed in the province during the CARAA. (Philippine News Agency)