6 drown in Pangasinan during Holy Week 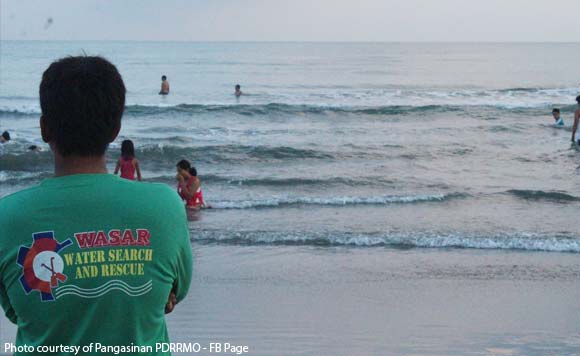 Based on the situational report of the PDRRMO as of April 21, the
drowning incidents took place from April 18 to 20.

They were rushed to a nearby hospital but were pronounced dead on arrival.

Both were declared dead on arrival by attending physicians.

On April 20, Jaime Cadorna, 59, of barangay Laoac also a resident of the same place, drowned and was declared dead on arrival.

Pia Flores, an administrative aide of PDRRMO in an interview Monday, further disclosed that only near-drowning incidents were recorded at the Lingayen beach.

She added that jellyfish stings and heat exhaustion, among others, were also reported during Lent.

“The victims were given first-aid treatment to which some have been cured immediately while others needed to be transported in nearby hospitals due to difficulty in breathing caused by the sting, but all of them are well now,” she said.

Flores further said that PDRRMO remains under blue alert status as of Monday since there are still tourists visiting the coastal areas of the province. (PNA)