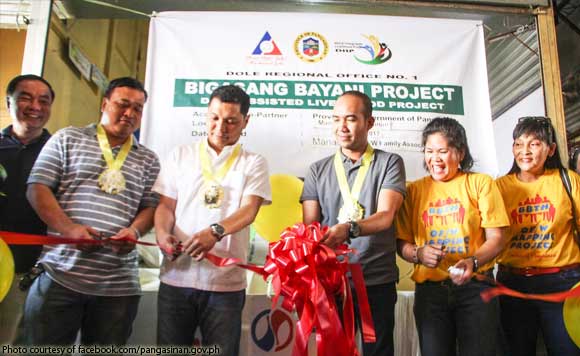 0 286
Share
Want more POLITIKO News? Get the latest newsfeed here. We publish dozens and dozens of politics-only news stories every hour. Click here to get to know more about your politiko - from trivial to crucial. it's our commitment to tell their stories. We follow your favorite POLITIKO like they are rockstars. If you are the politiko, always remember, your side is always our story. Read more. Find out more. Get the latest news here before it spreads on social media. Follow and bookmark this link. https://goo.gl/SvY8Kr

Three Bigasang Bayani rice retail stores are now open in three separate towns of Pangasinan, put up jointly by the provincial government and the Department of Labor and Employment (DOLE).

Manned by overseas Filipino workers (OFWs) if not members of their families, the three pilot rice retail stores are located in the towns of Mangaldan, San Jacinto and Manaoag.

The Bigasang Bayani will serve as source of livelihood of members of the Overseas Filipino Workers Association from those towns.

According to Ferrer, Bigasang Bayani, a first in the country, is one of the components of Pangasinan Migration and Development Council’s (PMDC) flagship program Bantay Barangay, Tulong Hanapbuhay.

The program caused the conduct of OFW mapping all over the province that led to the establishment of the OFW family association, and eventually the province-wide Pangasinan OFW Family Federation Incorporated (POFFI).

The opening of the rice retail stores was made possible through the strong support of Gov. Espino in partnership with the DOLE as provided for in a memorandum of agreement.

A grant of P1,025,931, with DOLE shouldering 80 percent, was made available for the three pilot rice retail stores,

These were used in buying their rice stocks, equipment, and for other miscellaneous fees as well as other rice stocks for the barangay retail store extension.

Ferrer stressed that more rice retail stores are to open in the coming months to cater not only to the OFW associations’ families but to the public as well. (PNA)