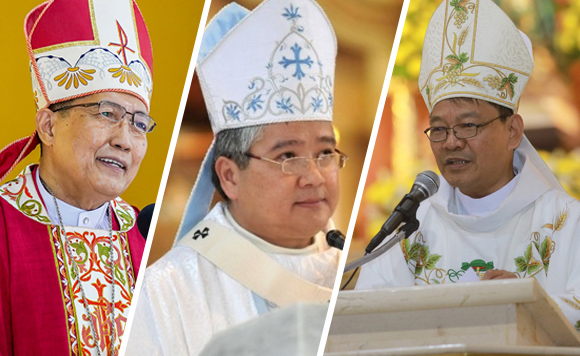 0 59
Share
Want more POLITIKO News? Get the latest newsfeed here. We publish dozens and dozens of politics-only news stories every hour. Click here to get to know more about your politiko - from trivial to crucial. it's our commitment to tell their stories. We follow your favorite POLITIKO like they are rockstars. If you are the politiko, always remember, your side is always our story. Read more. Find out more. Get the latest news here before it spreads on social media. Follow and bookmark this link. https://goo.gl/SvY8Kr

Three notable archbishops from North Luzon have expressed the collective denouncement of the Roman Catholic Church against killings and corruption in the Philippines.

In a joint statement, Archbishops Marlo Peralta of Nueva Segovia Ilocos Sur, Archbishop Socrates Villegas of Lingayen-Dagupan, and Archbishop Ricardo Baccay of Tuguegarao said that doing so is a moral imperative.

The archbishops lamented multiple and rampant killings of drug suspects, journalists, political opponents, lawyers, and even priests during the last five years.

“We have moral duty to resist and correct a culture of murder and plunder as much as the prolonged patter of hiding or destroying the truth,” the statement read. However, the Church is urging political leaders to do “non-violent” actions as “the only morally acceptable resistance”.

This statement was read in their respective cathedrals on Sunday, September 12.